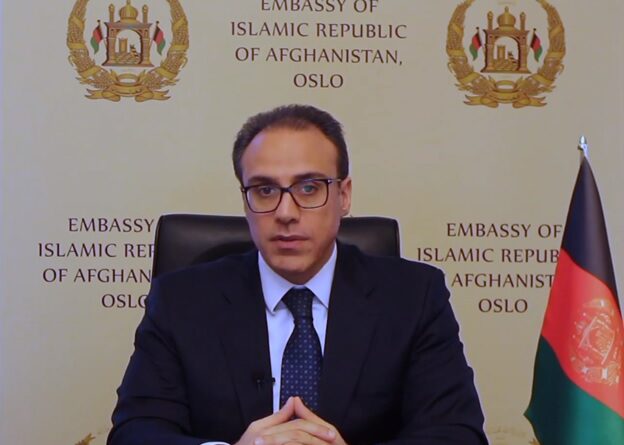 On November 16th, 2020 Ambassador Ghafoorzai gave opening remarks at the 2020 Afghanistan Week at the invitation of its organizers.

The Afghanistan Week is a bi-annual event organized by the Norwegian Afghanistan Committee, the Chr. Michelsen Institute (CMI), the Peace Research Institute Oslo (PRIO) and the Nansen Centre for Peace and Dialogue (NCPD), with support from Norad, Fritt Ord and the Norwegian Centre for Humanitarian Studies (NCHS). The Afghanistan Week is a long-time tradition of a series of seminars and discussions regarding Afghan culture, society, politics and history.

The initiative is primarily intends to give  non-governmental actors, such as journalists, civil rights activists, Afghan scholars and other experts a platform to discuss issues related to human rights, peace and conflict studies and international relations.

Delivering opening remarks at this year’s Afghanistan Week, Ambassador Ghafoorzai started by thanking the Norwegian Afghanistan Committee (NAC) for their work in Afghanistan, especially in the areas of rural development and women’s health. The NAC has been active in Afghanistan since the 1980s and is one among several Norwegian NGO’s currently engaged in country, symbolizing the historic friendship and solidarity of Norway with the people of Afghanistan.

Norway’s contributions, both via its bilateral relations with Afghanistan and by the work of Norwegian NGOs, have played a key role in the achievements of the past two decades in the areas of civil society, consolidation of democratic values, human rights and women’s rights, enabling Afghanistan to reclaim its traditional role as a hub for cross-regional trade, connectivity and economic cooperation.

Today, Afghanistan counts with a vibrant civil society where men and women fully participate; the most independent media of the region, with hundreds of TV, print newspapers and radio stations; and democratic values have been consolidated not only in urban areas, but also in remote parts of the country. Afghan women have taken a prominent role in the economic, civil and political life of Afghanistan, being represented as businesswomen, government officials, in the police and security forces and as part of the negotiating team for the peace process.

Ambassador Ghafoorzai also noted that this year’s Afghanistan Week comes at a time of both opportunity and challenges, in the context of the peace process currently underway.

Despite the Government of Afghanistan’s display of compromise and flexibility with release of thousands of Taliban prisoners, there has been no reciprocity in return as attacks and levels of violence remain very high.  He stressed the urgency of an immediate ceasefire to protect the lives of civilians and prevent any weakening of public confidence in and support for the peace process, and expressed his gratitude to Afghanistan’s international partners, Norway in particular, for their support of peace efforts.

Ambassador Ghafoorzai ended his remarks by giving an overview of the Government’s Development Agenda (ANPDF-2), to be presented in the upcoming Geneva Conference. This agenda is aimed to transition from an aid-dependent economy to self-reliance in a post-peace phase.

The success of the new Development Agenda depends on several factors, being the most importance achieving a dignified and lasting peace. Maintaining and strengthening regional and international consensus will be pivotal for a long-lasting peace.

Moreover, continued support and partnership in the post-peace phase for the national peace and development framework and the infrastructure projects will spur economic opportunities and enable the country to regain its traditional position as a hub for cooperation, trade and dialogue.

Ambassador Ghafoorzai ended his remarks by expressing his confidence in the future of Afghanistan, based on the will of the Afghan people to achieve stability and prosperity and the enduring support of its international partners, and wishing everybody a successful Afghanistan Week.