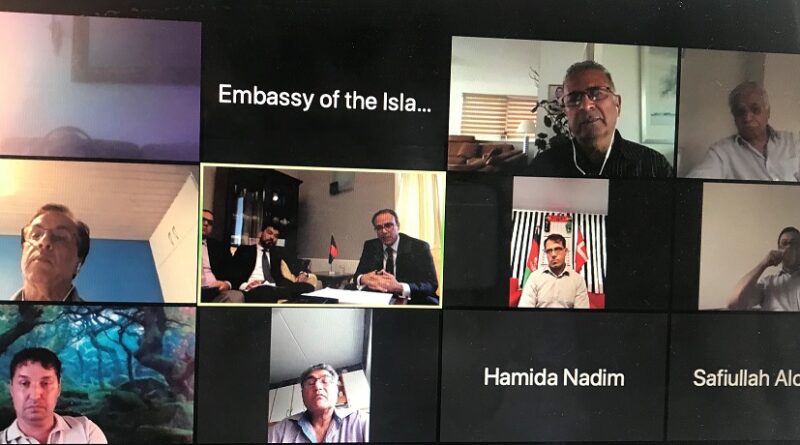 Ambassador Ghafoorzai and Embassy staff held a video teleconference meeting with a group of the Afghan diaspora in Denmark, which included heads of cultural and educational associations. The discussion was part of the periodic interactions with the Afghan community in Denmark aimed at collaboration in cultural and other fields, in line with the Embassy’s strategic objectives.

Out the outset, Amb. Ghafoorzai gave an overview of the Embassy’s activities over the past six months, in respective fields, developments in Afghanistan, with a particular focus on the peace process; measures taken by the Embassy to meet the Consular needs of the Afghan community in Denmark and also areas of collaboration between the Embassy and diaspora.

He praised the work being done by the Afghan diaspora in Denmark, within various associations and organizations and referred to it as an asset, which the Embassy seeks to fully utilize as part of efforts to implement its objectives in various areas. He also noted how the diaspora could be effective in the areas and public and peace diplomacy, especially at a time when the peace efforts were reaching an important phase.

Ambassador Ghafoorzai noted that he look forward to meeting the diaspora in his next working visit to Copenhagen, once travel is permitted, in light of the Covid-19 pandemic.

The group of Afghan diaspora thanked the Embassy for the initiative and its commitment and efforts to meet the Consular needs of Afghan community in Denmark.