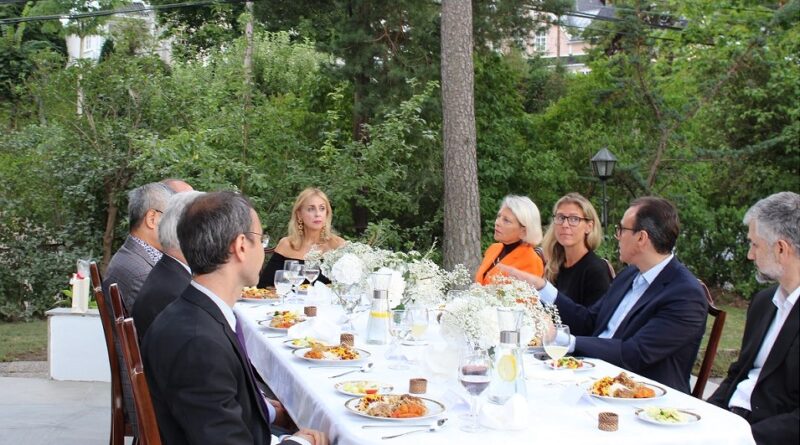 This past week, Ambassador Ghafoorzai hosted Ambassadors and other representatives in Oslo to discuss on the ongoing efforts in relation to the Afghan-led and owned peace efforts and the overall position of the Government in the process.

At the outset, Ambassador Ghafoorzai gave an overview of the two meetings held last month on strengthening regional and international consensus for peace, as well as the Consultative Peace Jirga.

Held earlier this month, the Consultative Peace Jirga was attended by more than 3,000 representatives from all areas of Afghan society, including prominent national personalities, members of parliament, civil society, women and youth groups, who discussed and decided on various issues related to the peace process.

He noted that the Consultative Peace Jirga also called the Taliban to ensure that the released prisoners renounce and avoid reverting to violence and attacks, meet the expressed commitment of releasing prisoners of the Afghan national security forces, initiate a reduction of violence and a permanent ceasefire and engage in direct negotiations with the government of Afghanistan.

Ambassador Ghafoorzai also emphasised the importance of ensuring an outcome to peace efforts that meet the demands of the Afghan people.

To that end, he asserted that the Government of Afghanistan has prioritised ensuring the preservation of the Republic, the national institutions and the democratic achievements of the last twenty years, especially in regards to human rights and women rights and empowerment. These achievements have come with the joint sacrifice of Afghanistan and the international community. Preserving and consolidating these foundational achievements would be a tribute to all who sacrificed their lives in that endeavour.

Moreover, he also underscored the important role of the international community in helping ensure an outcome that meets the demands and expectations of the people of Afghanistan. He asserted that the people and Government of Afghanistan have taken various measures to move the peace process forward for the sake of lasting peace and stability in the country. This should be reciprocated in order for direct talks to begin as soon as possible.

Ambassador Ghafoorzai expressed his gratitude to the international community and their representatives present at the briefings for their continued and steadfast support for the Afghan-led peace process and highlighted the importance of sustained support in the future, including in the post-peace development phase.

He also expressed Afghanistan’s gratitude and appreciation for the support, solidarity and partnership of the international community, which was an important part of the many foundational gains achieved.