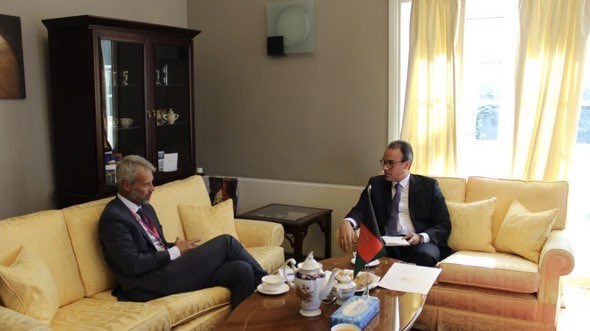 On September 1st Ambassador Ghafoorzai met with the newly appointed Ambassador of the Kingdom of Norway to the Islamic Republic of Afghanistan, H.E. Mr. Ole Andreas Lindeman. The Ambassadors discussed different aspects of Norway-Afghanistan’s bilateral relations and cooperation, including Norway’s current and future contributions in the areas of governance, development and peace, among other issues.

Ambassador Ghafoorzai congratulated Ambassador Lindeman on his appointment and noted that he will be taking up  his position at an important juncture, in which efforts for a lasting and dignified peace have reached a new phase and the collaboration between Afghanistan and all international partners is focusing on laying the foundation of a continued partnership in the coming years. To that end, it was highlighted that a successful outcome of peace efforts, one that meets the expectations of the people, would go a long way in advancing not only security, but also development and prosperity.

Ambassador Ghafoorzai expressed his gratitude to Norway for its multi-sectoral contributions, which are highly valued by the Government and the people of Afghanistan and constitute a significant part of the many gains of the past. He also underscored the importance of a sustained partnership in the years ahead, based on common principles and values, and expressed his willingness to continue the close collaboration between the Embassy of Afghanistan in Oslo and the Embassy of Norway in Kabul on different initiatives concerning the embassies’ activities.

Ambassador Lindeman reaffirmed Norway’s continued support to Afghanistan, not only during the peace process but also in the post-peace development of the country. He stressed that Norway will remain engaged in Afghanistan in different sectors, including development, governance and security.