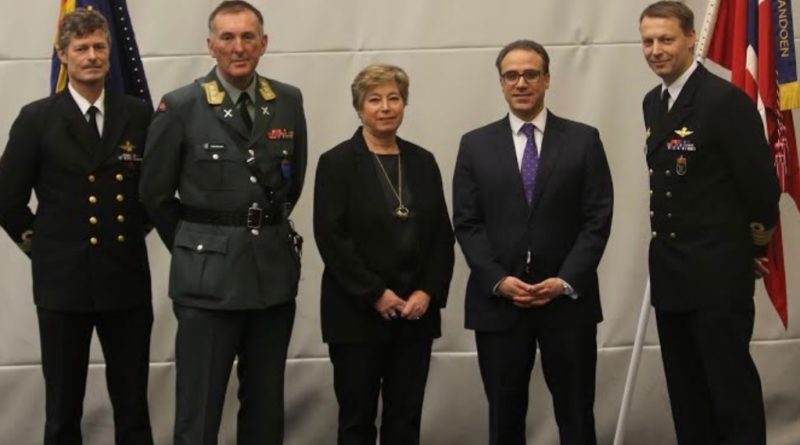 Ambassador Youssof Ghafoorzai visited Haakonsvern Naval Base in Bergen to take part in the medal ceremony for Norwegian soldiers who recently returned from deployment in Afghanistan, as part of the NATO-led Resolute Support Mission’s (RSM) “train, advise and assist mission” in support of Afghan national security forces.

The event brought together the group of Norwegian soldiers whose rotation recently concluded and were replaced a by a new group of soldiers for the RSM Mission, their families and senior officials of the Norwegian government, including State Secretary of the Royal Norwegian Ministry of Defense, Ms. Tone Skogen and other senior Norwegian Military officials.

Amb. Ghafoorzai addressed the gathering, highlighting the important contributions of Norwegian soldiers in the past 19 years within the framework of both the former NATO-led ISAF and the current RSM mission. In that regard, he stated that their service was an important part of the broader international effort which helped enable Afghan national security forces to “assume the lead role for the security and defense of their country.”

“My main message here today is to say thank you for your contributions. But I also want to highlight the way in which your service and sacrifice has and continues to positively impact the overall situation and help make a difference in the lives of ordinary Afghans,” he said.

“Thanks to your support and that of other partner countries, our security apparatus have progressed into a strong and capable force that’s now leading the security effort against a nexus of terrorist and extremist groups, that have come from outside Afghanistan, and which still pose a threat to global security, including that of the European continent.”

He gave an overview of the current security situation and highlighted the consistent and new gains of Afghan security forces in their combat against terrorism and extremism and further consolidating control of territory throughout the country, including Nangharhar province, which had become virtually cleared of  Daesh presence.

“Security is an imperative that reinforces progress in various domains of society. And the contributions that you all make are an important part of the new Afghanistan that is today.”

“Nothing better reflects this than the fact that democratic values and principles have grown deep roots in society; a new and emerging younger generation are assuming leadership positions inside and outside government; and Afghan women have regained their historic role as powerful agents of change in politics, the social domain and even now in the private and business sectors.”

He also paid tribute to the memory of Norwegian soldiers that had perished while serving in Afghanistan during previous years: “The memory of your sons, daughters and loved ones will remain in the hearts and minds of all Afghans. Amidst the grief and sorrow, we humbly as you to know that their sacrifice helped pave the way for a better and brighter future for millions of Afghan children.”

In conclusion, he highlighted the importance of the continued partnership and collaboration between Afghanistan and Norway, and the broader international community for security, stability, and prosperity in Afghanistan and beyond.