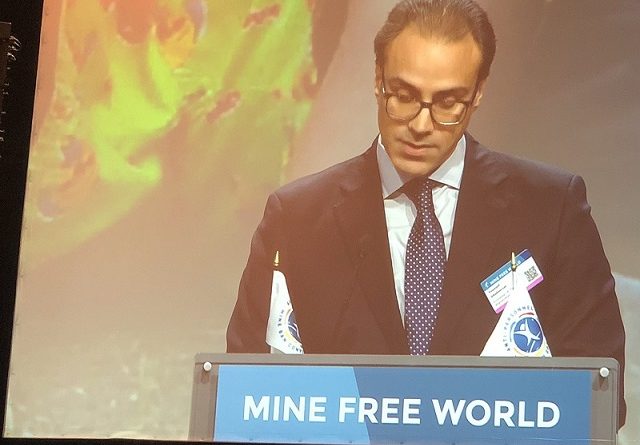 Addressing the Fourth Review Conference of Mine Ban Treaty, Ambassador Ghafoorzai addressed the conference, highlighting various aspects of Afghanistan’s mine-clearance activities, including clearane operations, the proactive role of women in the progress, support for victims and the way forward. Ambassador Ghafoorzai mentioned that Afghanistan is a country that has been and remains a prime victim of land mines and it has been combating landmines in the last three decades. He added that last year Afghanistan was honored and had the privilege to serve as president during which it sought to strengthen international attention and support to achieve a mine free world for all humanity. Ambassador Ghafoorzai reaffirmed Afghanistan‘s commitment against Anti-Personnel mines.

Mentioning the important role of Afghan women in clearing minefields, Ambassador Ghafoorzai stated that in June 2019, a dedicated all women team, began mine clearance activities in Bamyan, province which is the first province to become mine-free. Ambassador Ghafoorzai stated that, this broadly signifies the impact of the women in Afghanistan and the importance of their contribution in not only mine clearance but all aspects of society. He emphasized that integration of women in humanitarian mine action in Afghanistan remains a work in progress and pointed out that Afghanistan has been working to assist women involvement in various demining tasks and will enhance progress in this area.

Furthermore, Ambassador Ghafoorzai mentioned that in recent years, Afghanistan witnessed a significant increase in the use of IEDs from terrorists threatening the stability and prosperity of Afghanistan and urged for the increase of the international attention in addressing the issue of land mines of an Improvised nature affecting not only people Afghanistan but also others around the world

Ambassador Ghafoorzai also urged for an increase in awareness in meeting the needs of mine victims. He stated that over the years, Afghanistan has been among the countries that witnessed an increase in the inclusion of mine survivors and other persons with mine disabilities, to the “Victim Disability Programs”, underlining this as a key factor for the successful reintegration of mine survivors in their communities and our effort to ensure their ability lead a dignified life.

Ambassador Ghafoorzai reassured that the forty-nine actionable measures contained in the Oslo action plan will be part of Afghanistan’s comprehensive approach in combatting landmines – covering all areas including; mine clearance; risk reduction and education; victims assistance; international cooperation and assistance and measure to ensure compliance .

Ambassador Ghafoorzai concluded his speech by conveying Afghanistan’s gratitude for the support provided by the international community for mine clearance operations including partner countries and agencies and reaffirmed Afghanistan’s firm commitment to fully implement all its commitments under the Anti-Personnel Mine Convention.