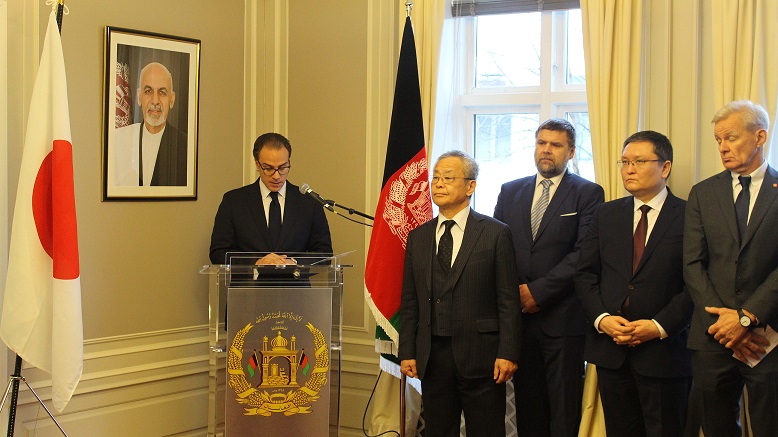 Excellency, Deputy Secretary General Larsen of the Ministry of Foreign Affairs of Norway

It is my pleasure to welcome you all here – this morning – at the Embassy of Afghanistan in Oslo.  For those who I haven’t met so far – I am the new Ambassador of Afghanistan to Norway.  And I very much look forward to working with all of you  in the way forward.

We gather here today to commemorate the life, work and legacy of an individual who embodies the very meaning and essence of  “humanitarianism.” Someone who committed his life to improving the life of others AND rendering a noble service and contribution for the benefit of all of humanity.

Dr. Tetsu Nakamura’s  work in support of the people of Afghanistan, dates back several decades – when he first began his work as a physician treating Afghan refugees. His support was based on an abiding commitment to ensuring that the service he rendered “MUST” have the most tangible effect in helping improve the lives of ordinary people.

He believed the problem of severe drought and poverty were taking the lives of more people than his clinic could save.   As such, he shifted his focus from healthcare to the development of irrigation and agriculture in Afghanistan.

The late Dr. Nakamura had once said: “A doctor treats patients one by one, but this helps build a whole village.” I love seeing a village that’s been brought back to life.”

Operating mainly in Nangarhar province of eastern Afghanistan, he began and helped implement important projects in the areas of water management, irrigation and agriculture.

Using traditional Japanese techniques, he worked with the local population to build a network of canals, which helped transform an area of nearly a million residents.

Last Wednesday, on the 4th of December, Dr. Nakamura and five Afghan staff of his agency were tragically killed in a cowardly terrorist attack – which once again showed that terrorists would go at all lengths to try and prevent Afghanistan from prospering.  The attack was condemned in Afghanistan and around the world.

Dr. Nakamura was deeply loved by those who knew him. He shared a unique bond with the local population whose respect for, and admiration of  him, had them calling him “UNCLE MURAD.” News of Dr. Nakamura’s assassination resulted in shock, grief and sadness among all Afghans, throughout the country.

A resident of a district in which he was working –  was quoted by the New York Times  – saying:  “He showed us life – he helped build our land. He was a leader to us. I feel like they have killed my closest family member. They left us without Nakamura.”

His services were also recognized at the highest levels of the Government of Afghanistan. In October this year, His Excellency President Ghani granted him with honorary Afghan citizenship, declaring him as one of Afghanistan’s own.

Afghanistan is deeply grateful for his decades-long service in various spheres, which had a direct and tangible impact on improving the daily life of ordinary Afghans.

Our appreciation for his service and sacrifice is symbolized by the outpouring of national grief and solidarity – with the people and Government of Japan  and his esteemed family.

In the days and nights following his assassination, candlelight vigils in his memory have been held across the country by all strata of society, including women and youth groups, civil society and students.  The national assembly of Afghanistan held a moment of silence in his honor.

Streets and roads are being named after him and national air carriers have posted an image of him on their aircrafts.  Moreover, domestic Non-Governmental Organizations decided to grant the “Nakamura Humanitarian Award” to individuals achieving the highest levels of excellence in the area of human rights and humanitarian work.

In short, Dr. Nakamura’s work, achievements and sacrifice will forever remain in the hearts and minds of all Afghans – for many generations to come.  One of the best ways to honor his life is to continue the work, vision and objectives he set out to achieve.

Dr. Nakamura’s tragic assassination reaffirmed that terrorism remains a threat to all of humanity – targeting all peoples, of diverse nationalities, religions and cultures.  Defeating terrorism requires increased collaboration, based on more tangible and decisive action at all levels.

We once again condemn this attack in the strongest manner possible, and convey our condolences and sympathies to the people and Government of Japan and the family and friends of late Dr. Nakamura.  His loss is one that not only pertains to Japan, but rather Afghanistan – as well – and all of humanity.

This occasion is also an opportunity to convey our gratitude to the Government of Japan, one of our closest international partners, for its many important contributions in various sectors: including security, education, infrastructure, human resource development, humanitarian assistance,  agriculture and rural-development.

We look forward to enhancing our strong partnership and bilateral cooperation in the way forward.

With that, I now invite His Excellency Ambassador Masahiro Tauchi of Japan to deliver his remarks.