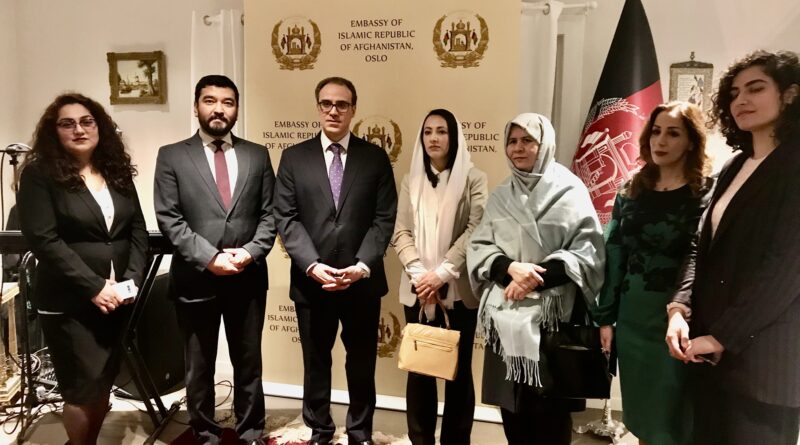 On the evening of March 8th the Embassy of Afghanistan in Oslo held an event in commemoration of International Women’s Day.

The event included participation from representatives from the diplomatic community and prominent women activists, including some that recently arrived in Norway, following the Taliban’s forced takeover in August. They included Ms. Shah-Gul Rezaee, member of parliament and Hoda Khamosh, a member of civil society who recently took part in the Oslo discussions on Afghanistan in January and other Afghan women from the diaspora community in Norway.

Also present were representatives of several Norwegian non-governmental organizations and academic institutions engaged and involved in Afghanistan issues, such as the Oslo Center, the Norwegian University of Life Science, Oslo Metropolitan University, the Munch Museum, etc.

The event heard remarks by Ambassador Youssof Ghafoorzai, Mrs. Shah-Gul Rezaee, member of parliament, Mrs. Elisabeth Eide, Professor of Journalism at OsloMetroplitan University, followed by a video clip on the role and situation of Afghan women, past and present, in Afghanistan.

In this opening remarks, Ambassador Ghafoorzai stated that this year’s Int. Women’s Day came a “at a time of great uncertainty and challenge for the people of Afghanistan, especially women and girls,” with rampant human rights violations, political turmoil, a devastating humanitarian situation and insecurity,” being a dark reality in the country.

He added that in two decades of partnership with int. community, “Afghan women again proved to the world that they are among the most courageous, talented and committed women around the world and that when given a chance, they always deliver and impact the development of their country and society.”

In the past two decades, Afghan women once again demonstrated their historic role and ability to impact different aspects of political, social and economic life and contribute to the development of a democratic Afghanistan, as politicians, parliamentarians, civil society, journalists and in other capacities.

The situation now was much different, in light of the Taliban’s forced takeover in August. Reprisal killings, intimidation and detention of women activists and restrictions on their right to work, education, assemble and to express their views had become a tragic norm in the country.

He added that “in times of crisis Afghan women have always displayed strength and in many cases were the spark that later became a heroic struggle for liberation and freedom.  The same strength was not seen in women activists demanding their rights and freedom to live as equal, productive and influential members of society, as all other women worldwide, including in Islamic countries.”

The contribution of Afghan women in different fields has been a common feature in Afghanistan’s history – both past and modern history.

A wide network of Afghan women activists inside and outside Afghanistan “are courageously advocating for not only the rights of Afghan women, but values that are important to all Afghans and to all countries that believe in democracy.”

Their work was “in line with the spirit of past historic figures such as “Soraya Tarzi, Rabia Balkhi, Malalai Maiwand, Naheed Shaheed and other such personalities who had committed to achieve in relation to defending national values and democracy in Afghanistan,” he said.

He referred Afghan women physicist Shar-Dokht Jaffari and her invention of radio-therapy treatment of cancer in 2017; and the success of the “All Girls Afghan Robotic Team,” in innovating a low-cost ventilator to treat the Corona virus, and that of the all-girls orchestra “Zohra” of the Afghan national institute of music, to whom he referred to as “Ambassadors in the area of the arts,” as some examples of the dynamism and talent of Afghan women and girls.

Afghanistan’s past gains were achieved through joint sacrifices, including the “loss of precious lives of mothers, fathers, sons and daughters in the international community,” for the goal of ensuring that “millions of Afghans were able to exercise their civic and democratic rights.” The international community’s support in defense of democracy in Afghanistan would now also be a tribute to the their sacrifices, as well.

He also hailed the important work of women activists in the diaspora in Norway, Denmark and Iceland, some of whom present at the event, for their work to defending women’s rights and democracy in Afghanistan.

He stated that the Taliban still have an opportunity to act in the interests of the people of Afghanistan and meet the demands and expectations of the people in relation to full respect for the rights of all Afghans, especially women, and accepting a political agreement with political groups and forces that leads to transitional inclusive government and holding of elections for people to decide their future destiny.  Should they decide not to, they would be accountable by the people and risk having any relevance whatsoever in the future of Afghanistan.

He reaffirmed that the people of Afghanistan have chosen democracy as the only form of governance for the future of their country. They fought for and sacrificed these for these values which are embedded in the hearts and minds.

In her remarks, member of parliament and women’s activist Shah-Gul Rezaee provided an overview of the way in which Afghanistan’s significant gains of the past two-decades in relation to fundamental rights and freedoms, especially of women and girls, have entirely been reversed and abolished.

“This International Women’s Day is being celebrated while women in Afghanistan are deprived of their most basic rights. Women are fighting for bread, work and freedom on the streets of Kabul, but women’s voices are being responded by whipping and violence, and with imprisonment and torture,” she stated.

Speaking about the past gains, “at the least in the last two decades we have used all fields and capacities to institutionalize the participation of women in our society. One of the most important achievements of the last two years was the participation of women.” She added, “Our struggle for equality began at the village level. Thousands of women in Afghanistan started fighting for change and became the voice of women across the country.”

“Taliban should know that the current security is a graveyard peace. There is no constitution, no bill to guarantee civil rights, and no law to deal with governance. Government does not continue in the vacuum of law, based on force, fear and intimidation. The satisfaction of the people is one of the basic foundations for the stability of governments, and we know as a principle that international legitimacy depends on internal legitimacy and satisfaction of citizens.”

On the way forward, she added, “We as the post-2001 generation and the world, as the 20-year old partner of Afghan people, have the responsibility to help Afghanistan in this situation. In addition to the urgent need for humanitarian assistance, we can work for a comprehensive political solution that results in an acceptable government and lasting stability based on justice and civil rights.” She further added that such a solution “would have to be based on the consent of the people.”

Professor Eide spoke about the precarious situation for journalism and media in Afghanistan. She stated the country has witnessed an exodus of journalists in recent months, and a large number of media outlets in Afghanistan have been closed down. have closed.  Reasons are the threat situation, censorship, other constraints as well as a large-scale exodus from the country, particularly of women journalists. She stated that according to several sources, according to 80 percent of Afghan female journalists are now jobless.  Some of the women who are still active, express their worries about interference in their work and new rules of conduct, but still underline their duty to try and keep Afghans informed.

The event concluded with a performance by Afghan vocalist Meetra Asee, who sang one of her new releases “Azadi,” or freedom, in honor of the continued struggle of Afghan women for their fundamental rights and freedoms.