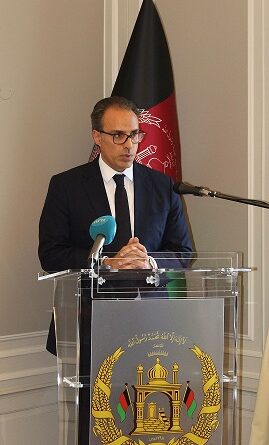 On the 20th of August, the Embassy of Afghanistan in Oslo held an Event “Ensuring a Better Future for Afghanistan Through Solidarity and Support.”

The event was aimed at galvanizing solidarity and support for the people of Afghanistan and to improve the situation in the country, at a time when Afghanistan and its people are undergoing a difficult time.

In his opening remarks, Ambassador Ghafoorzai thanked participants for joining the event, which came “at a very challenging time for the people of Afghanistan – who find themselves in the midst of a very difficult situation.”

He stated that scenes from Hamid Karzai international airport had “shocked millions of Afghan inside and outside Afghanistan as well the international community.” Those images were reflective of what the people of Afghanistan were confronting from a humanitarian standpoint, but also in other aspects as well.

More than 18 million Afghans are in dire need of urgent humanitarian assistance, with over 500,000 thousands people having been displaced in the past three months alone. Urgent assistance was now required included “the very basic: food, water, shelter and health-services.” He stated that while global attention on the current situation was wide-spread, “what was now needed was “equal attention with respect to provision of urgent assistance by the international community.”

To that effect, he signaled that the UN’s global appeal of $1.3 billion was less than forty percent funded and that needed to change “if the situation was to improve.” Scaled up global humanitarian assistance would only be possible through “a more unified international response by major global and regional organizations, such as the UN, the EU, WFP and other partners.”

The people of Afghanistan have dealt with challenges and tribulations throughout its history. “Afghanistan is a proud nation that has always found a way to persevere and overcome seemingly impossible odds.”  “Our national unity has always been the basis of our national strength. This will once again enable to get past this difficult stage.”

He stated that the current situation did not define Afghanistan’s identity. “Afghanistan is a country with a rich history and culture – a nation of sons and daughters that have contributed to the betterment of human civilization – poets, thinkers, scholars and physicians, such as Mawlana Jalauddin Balkhi (Rumi), Sayed Jamaluddin Afghan, Ebnisina, Abu Rayhan Al-Beruni among others.

The people of Afghanistan have sacrificed to advance the cause of human civilization and have been in the front of this effort over the past four decades. “Tragically, the challenges that we have endured are the direct result of factors external to our country.”

He conveyed gratitude for Norway’s historic solidarity and friendship with Afghanistan, which spanned more than four decades. He hailed Norway’s important contributions in the country during the past two decades, which were an important part of the many gains made over this period of time.  He also highlighted the important work of Norwegian NGO’s such as the Norwegian Refugee Council (NRC) and Norwegian Afghanistan Committee (NAC) as well as other partners that have been active in Afghanistan.

Ambassador Ghafoorzai, stated he, the NRC Sec. General Jan Egeland and the Minister of Refugee and Repatriation held a joint meeting last week on ways to “increase and align aid with urgent priorities.”

In the way forward, addressing the current situation required adjustments in various aspects. He highlighted the importance of host countries accepting a greater number of Afghans who “need to leave.”  He also called for extensions on avoiding “involuntary returns to Afghanistan from various countries.” A humanitarian corridor for evacuations and timely and efficient access to emergency humanitarian aid was also urgently needed.

On the issue of protection, he stated that the safety and security of the people was urgently needed, and that ensuring such protection “should not wait until a prospective political agreement is reached.” All citizens, “including human rights defenders, journalists, former government officials and members of the security forces must not be under any threat whatsoever.”

On the political front, he highlighted the importance of a comprehensive political agreement that would lead to a “dignified and lasting peace,” preserve the gains of the past two decades and meet the expectations and aspirations of the people.  Discussions and dialogue continued between the Republic and the Taliban to reach an agreement that leads to a “broad-based and fully inclusive government, composed of all ethnic groups and acceptable to all sides, most importantly, the people of Afghanistan.”

Also addressing the event were the Special Representative of the Norwegian Foreign Ministry for Women, Peace and Security, Mr. Kai Eide, Laila Bokhari, Dr. Curt Rice and Karolina Olofson. Participants expressed concern over the current situation in Afghanistan, reaffirmed their solidarity with the people of Afghanistan and highlighted the importance of international support to address the various challenges facing the people of Afghanistan and achieve peace, stability and prosperity in the country.

The event was also attended by several Norwegian media outlets, including NRK, Aftenposten and Daglabed. 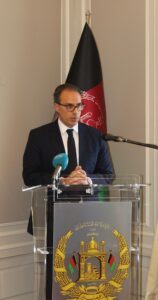 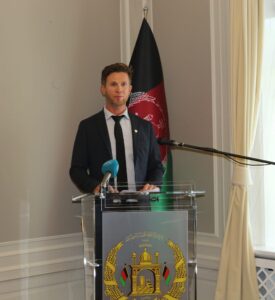 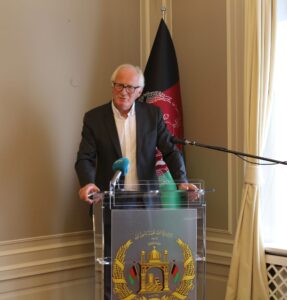 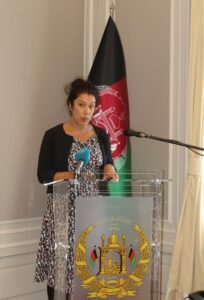 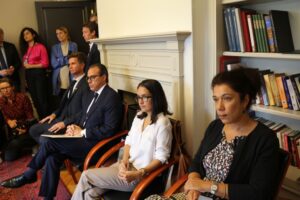 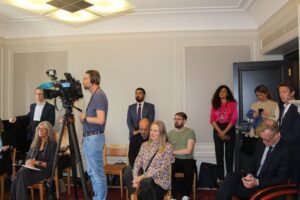