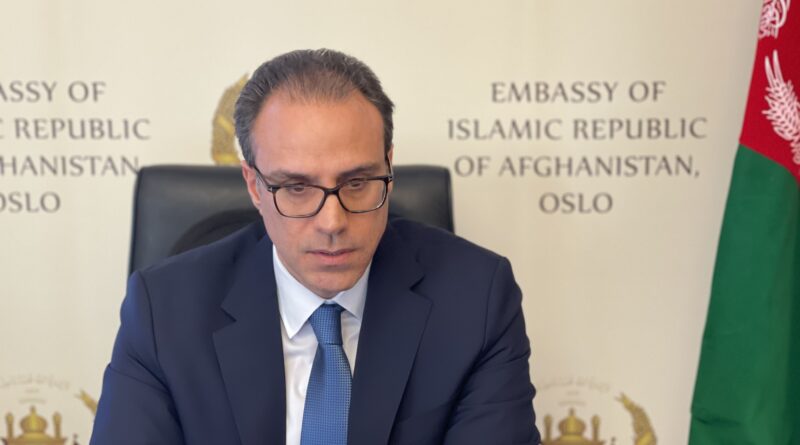 Yesterday, March 5th 2021, the Embassy of Afghanistan in Oslo held a virtual event commemorating the National Day of the Afghan National Defense and Security Forces (ANDSF). The event was attended by  senior representatives of the Norwegian Ministry of Foreign Affairs, Ministry of Defence, the European Union delegation to Norway, as well as other esteemed Ambassadors of the diplomatic community in Oslo, including Ambassadors of NATO, European and regional countries.

Opening the event, Ambassador Ghafoorzai paid tribute to the “dedication, service and sacrifice of Afghan National Defense and Security Forces, who bear immense responsibility in standing frontline in the global fight against terrorism. He emphasized the development of the ANDSF as “among the proudest and most important achievements made in the country over the past twenty years.”

The Afghan National Defense and Security Forces are a “strong symbol of national unity, pride and national strength,” and heroes of the country who “still stood at the very center of the continuing effort by all nations to defeat a threat confronting all of humanity.”

At the same time, he stated that their heroism came with “a price seen in the eyes of mothers, fathers, wives, husbands and children who have suffered the pain and anguish of losing loves ones in defense of one’s country.”

He went on to say that the service and sacrifice of Afghan Security personnel is deeply valued and appreciated by all segments of society, and that “nothing reflects this appreciation better, than last week’s images of young children of fallen soldiers approaching security forces, greeting them with flowers and thanking them for their service,” and doing so in tribute of the memory of their parents, who lost their lives in the line of service.

Ambassador Ghafoorzai then went on to point out the significant contributions of Norway and other partner countries, in building the operational capacity of Afghan Security Forces within the former NATO-led ISAF and current RSM Mission, through training, equipping and other support. Such assistance not only helped empower operational capacity of the ANSDF but also helped the achievement of “real and foundational gains” in different sectors of society.

Norway’s support for the Afghan Security and Defense Forces was an important part of the international support and security assistance to Afghanistan. In that regard, Norway helped establish and implement various initiatives. One such initiative was the “Crisis Response Unit” or CRU-222 contingent in the Afghan police force, which was now “one of the most effective units responding to sophisticated terrorist attacks.”

Ambassador Ghafoorzai also highlighted the key objective of reaching lasting, dignified and  comprehensive peace for all Afghans, which remained a key priority. He said that the people of Afghanistan made the difficult decision of looking beyond the past and into a new future, one of peace and prosperity. However, important steps taken this far, do now need to be reciprocated to build trust in and advance the process. It would be most important at this stage, to enforce a ceasefire. The role of the international community therein remained imperative to achieve a “defined, verifiable and dignified peace.”

The Ambassador closed his opening remarks by honoring the service and sacrifice of all servicemen and women of ANDSF and partner countries whose sons and daughters made the ultimate sacrifice in Afghanistan.

Mr. Atle K. Midttun, Deputy Director General of the Norwegian Ministry of Foreign Affairs, first highlighted the “Afghan-Norwegian long lasting and solid bilateral relationship” and stated that Afghanistan featured dominantly in the political agenda since 2001. Afghanistan has been Norway’s largest and longest lasting international military engagement, with thousands of Norwegian soldiers serving in Afghanistan, including in the training and mentoring missions, alongside the ANDSF.  Norway has agreed with the “conditions-based approach” in NATO and will continue to align with the consensus view in NATO.

He also highlighted Norway’s historic engagement in Afghanistan, referred to the proactive engagement of Norwegian civil society in Afghanistan during the nineteen-eighty’s and that its humanitarian presence was always maintained in the period afterwards. Afghanistan has been Norway’s major development cooperation partner and that new commitments were affirmed at the last November’s international conference on Afghanistan in Geneva. Norway and Afghanistan were in the process of renewing the bilateral Strategic Partnership Agreement (SPA).

Referring to Afghanistan’s important progress the past years, he stated that Afghanistan now had a young generation that is well educated and highly skilled, and that Norway was pleased to have contributed to this achievement.

Mr. Midttun also stressed the importance of the Afghan-led and owned peace process and reaffirmed Norway’s commitment and readiness to provide whatever support that was desired. He also stressed an outcome to the process that “protects the rights of all Afghans, including women, youth and minorities, and sustains and builds on the economic, social, political and developmental gains.”

Also speaking on behalf of the Norwegian government was Mr. Arild Eikerland, Deputy Director at the Norwegian Ministry of Defense. Mr. Eikeland also conveyed gratitude for the opportunity to address the commemorative event of ANDSF Day and stated that 9,200 Norwegian soldiers had served in Afghanistan since 2002, which marked the start of a new era of the Afghanistan-Norway partnership. Norwegian soldiers served within both the former NATO-ISAF and current Resolute Support – RSM Mission.

A few years back, Norway helped establish the Crisis Response Unit (CRU-222) in the Afghan police force and that this unit had advanced substantially in its development and the carrying-out of operations. Norway’s engagement in the security sector also includes its co-chairmanship of the Afghan National Army (ANA) Trust Fund, together with the NATO Senior Civilian Representative. Deputy Director Eikerland also underscored the importance of continued international support for the Afghan National Security and Defense Forces in the way forward for peace and stability.

European Union Ambassador to Norway, Ambassador Thierry Béchet then expressed his gratitude to take part in the commemorative event, and for the continued EU partnership for stability and self-reliance in Afghanistan. As a close partner of Afghanistan, the EU remains steadfast in its support for the Afghan peace process. This support includes both political and technical support.

He then underscored that the EU will continue its supports for Afghanistan in the way forward, as expressed at the international Geneva conference on Afghanistan last November.

On behalf of the EU, Ambassador Béchet also underscored the importance of an immediate ceasefire, which is needed to help move the peace process forward in Afghanistan. The EU will therefore continue its support for the ANDSF in the way forward and remains committed for peace, stability and prosperity in Afghanistan.

In final remarks, Ambassador Ghafoorzai thanked all participants for their important contributions, and their continued support for Afghanistan. He then emphasized the importance of further strengthening regional and international consensus on Afghanistan for a lasting and dignified peace and  that Afghanistan’s objective was to strengthen its standing as a platform for international cooperation between and among all countries. 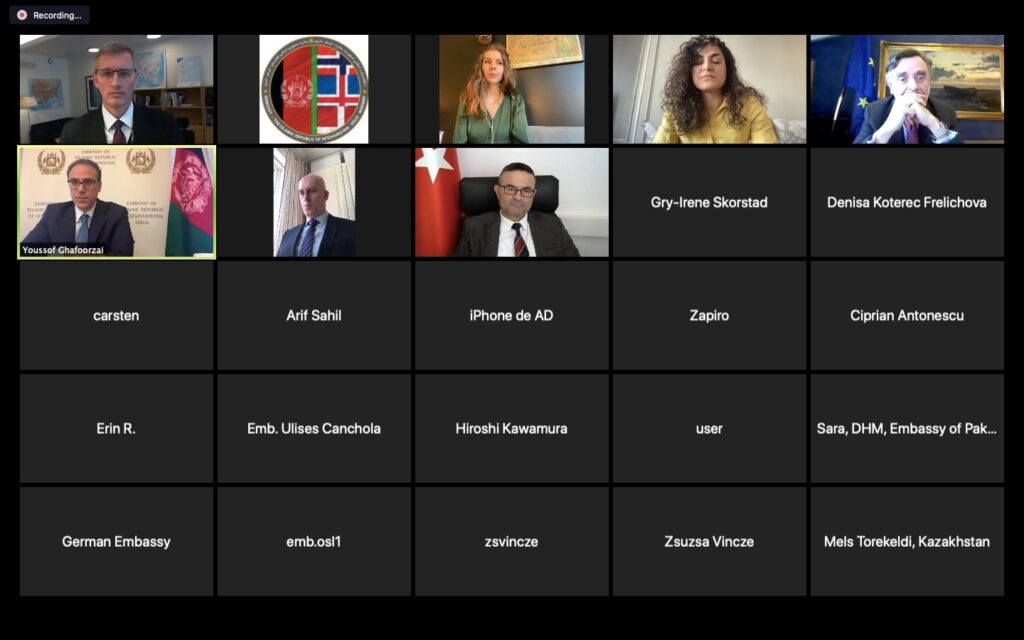