Between Afghanistan and the Kingdom of Norway

It is with great pleasure that I issue this message as Afghanistan’s new Ambassador to Norway on the occasion of the 57th anniversary of the establishment of diplomatic relations between Afghanistan and the Kingdom of Norway, which took place on December 31, 1962.

Afghanistan and Norway have, throughout history, enjoyed friendly and cordial relations. This has been part of our long-standing commitment to maintaining harmonious relations with the entire international community, in accordance with the principles of mutual respect and effective cooperation for the common benefit of promoting and advancing peace, security, development, and prosperity at the national and international levels.

In December 2001, the Royal Norwegian Embassy was established in Kabul, which was followed by the opening of the Embassy of Afghanistan in Oslo in 2004. These two important events marked a milestone in the start of a new era of full diplomatic engagement, cooperation and relations between Afghanistan and Norway, and were an important part of the new partnership forged between Afghanistan and the international community in 2001 to defeat terrorism and extremism and enable all Afghans to shape a new future for their country.  A future in which all Afghans are able to determine their political destiny and contribute to the rehabilitation and development of their proud nation.

Today, despite challenges that remain, the vision of a new Afghanistan that took shape eighteen years ago is  turning into reality. Democratic values and principles have grown deep roots in Afghan society. A new and committed generation of young Afghans is increasingly assuming leadership positions in various governmental and non-governmental institutions. Afghanistan’s national security institutions have progressed to a point where the brave men and women of the Afghan national army and police have taken charge in the areas of security, including counter-terrorism operations, and in promoting law and order.

The role of our vibrant and committed civil society has been elevated to new heights, providing insight and innovative ideas to further consolidate democracy and advance human rights and social justice in our society. In the area of the free press, the wide-array of private media outlets continues to grow in number and scope, serving as a catalyst to fostering further progress in the areas of good governance, human rights, and even development. Moreover, Afghan women have and continue to assume a vitally important role as powerful agents of change, influencing and implementing policies for positive change in Afghan society.

These many gains are the result of the joint efforts of Afghanistan and her international partners over the past several years, and it is needless to say that Norway’s role in this endeavor has been essential, as one of Afghanistan’s most committed and closest partners. During the past several years, our bilateral relations and cooperation with Norway have evolved into a Strategic Partnership.

Norwegian assistance to Afghanistan has been multi-sectoral in nature, spanning the areas of security, development, human rights, governance, democracy and peace and reconciliation. This support role has included sacrifices in the context of 10 Norwegian armed forces lives lost as part of the international security and stabilization effort in Afghanistan. We pay tribute to the memory of all Norwegian personnel who made the ultimate sacrifice while serving in Afghanistan.

From a historical perspective, Norway’s strong expression of friendship and solidarity with Afghanistan was also tangibly demonstrated in the period before 2001 – during the 1980s – when the people of Afghanistan waged their heroic and successful struggle for liberation and independence from foreign occupation. This was manifested by the important humanitarian aid provided by non-governmental organizations, including the Norwegian Church Aid (NCA), Norwegian Refugee Council (NRC) and the Norwegian Afghanistan Committee (NAC).  Today, these organizations remain actively engaged in providing essential humanitarian assistance in the country.

We affirm our deep appreciation for Norway’s long-standing support and assistance to Afghanistan, provided during two of the most difficult stages of our nation’s modern history. But more broadly, we believe this anniversary is also a time and opportunity for us to initiate new steps to expand our bilateral relations and collaboration across various fields.

We believe the full potential of Afghanistan-Norway cooperation has yet to be realized. As the new Ambassador of Afghanistan to Norway, I look forward to playing my role in the context of the start of a new era in our bilateral cooperation. In this regard, my efforts will include enhancing collaboration in various areas, including economic and development cooperation, peace and public diplomacy, cultural ties, the health and education sectors, migration, as well as security and defense cooperation.

Once again, we thank our friends and partners in Norway for their valuable support and assistance over the years, which has been a visible part of profound positive change that has and continues to take place in Afghanistan. We approach the future with great confidence and new energy as we continue our joint efforts with our international partners to achieve a peaceful, secure, prosperous and self-reliant Afghanistan.

We look forward to elevating Afghanistan-Norway bilateral relations and cooperation to even newer heights. 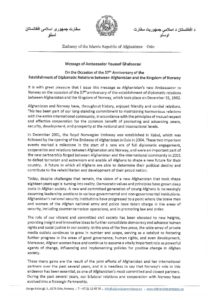 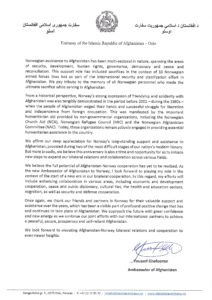