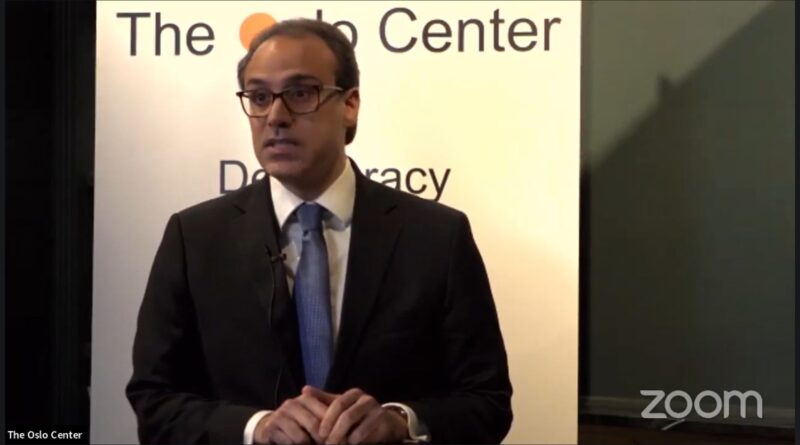 I am especially thankful to our friends at the Center – for dedicating this session to democratization in Afghanistan – and the way in which this important achievement has now been entirely undermined in light of the Taliban’s forced military takeover of the country.

Much is often said about democracy’s ability to allow people to live decent lives; to have the freedom to criticize; to express their views, and to meet their aspirations.  But among these elements, democracy is also a factor for stability, enabling the social and economic well-being of peoples in society.

Given the situation that has come about with the Taliban’s takeover in Afghanistan, this is something which millions of Afghans – from all walks of life – can clearly relate to.

From a historical perspective, democratic values have not been a new phenomenon in Afghanistan. They have roots in a long and rich history in which generations of Afghans have served to advance this principle as a way of life. The start of international engagement & partnership in 2001 enabled the people to “restore a democratic environment.”

Looking back in this period of time, Afghanistan’s democratization can be seen as one of the most important – if not the single most important achievement – of the past twenty years.

Development of what was the most vibrant and open media in our immediate region; the building of democratic institutions; the emergence of a vibrant civil society; and come of age of a new generation of Afghans who courageously took the step forward to help build their country. These are all “very real examples” of what was achieved.

And at times, we tend to forget that these gains were made during an extremely difficult security situation. This indicates something beyond just ability and courage alone. It also reflects the people’s deep desire and choice to live in a democratic society.

The people made this choice believing that a democratic form of governance would enable them to pursue their dreams and aspirations; to express their beliefs openly; and above all – to exercise their precious right to choose their destiny.

Without any doubt, developments in the country have not always reflected the position of the people, their choices, and decisions. The past few elections were not void of problems and certainly had their flaws. And a better degree of political stability and national cohesion could have and should have been preserved for the stability of Afghanistan.

But despite all the problems – which were indeed many – Afghanistan remained a democratic society and people took pride in being able to benefit from the freedom and opportunities that came with this universal value.

Obviously, a lot has now changed – and the country stands in a much different situation today.  The Taliban’s forced military takeover – in violation of international law and the expectations of the people and global community – has taken the country back to a point which the people never expected to return to.

The situation is now extremely dire from a political, humanitarian, social, economic and security standpoint.  The humanitarian catastrophe is such that more than half the population is “deprived of the most basic of services needed for mere survival.”

From a social and political standpoint, democracy and all the rights that come with it – were taken away almost overnight.  Millions of women and girls deprived of their God-given right to education, to work and to participate in civic activities. Hundreds of media outlets have been closed and journalists and activists are subject to threats and intimidation.

The situation has brought enormous pain and anguish to millions of Afghans – inside the country but also abroad. The factors for what occurred on the 15th of August are many. However, failure to reach a political agreement under the Doha talks – which became virtually impossible after the withdrawal of international forces – was a main factor.

Had the withdrawal of international forces occurred after a political agreement – to which all sides committed – the situation would have been much different.   An agreement based on national consensus would have led to a legal and official transfer of power to a broad-based government that would have had the ability and legitimacy to direct Afghanistan on the path of peace and stability.

Despite all the anguish and dismay:  the focus now should be on what must be done to “re-direct” the country back on the path of stability.

Completing the peace process that began in Doha for a comprehensive settlement which includes all core issues – formation of an inclusive government, the form of a future administration, respect for the democratic rights of all citizens and measures to prevent Afghanistan from again turning into a base of international terrorism – needs to be reached.

The people have not given up hope on such an agreement. We must not forget that a political settlement was one of the main provisions of the Doha agreement – and that it was reaffirmed by several Troika Plus meetings, the Heart of Asia Meeting on Afghanistan, UN Security Council resolution 2513 and several recent Foreign Ministerial meetings of regional countries.

The Taliban should come to realize that imposed rule is neither acceptable nor sustainable – and that legitimacy and acceptability can only come with a broad-based national agreement with various political groups and segments of society – that reflects the will of the people.

The international community has an important role and responsibility to help reach this agreement. It remains the only answer to the “un-resolved” conflict in Afghanistan.

I would like to conclude by referring to a quote by former US Secretary of State, John Kerry, a few years back on the International Day of Democracy:

[and I quote]: “Democratic societies are strong societies, because people are free to speak out against injustices and to discuss, debate, and work together to drive positive change – even with those who hold opposing views.”  [end of quote].

At this very crucial point in time – this lies at the heart of what we are seeking to achieve in relation to a political settlement – in the interim – that paves the way for a lasting peace in a democratic Afghanistan.

But we must not forget that Afghanistan’s long-term stability can only be guaranteed through free and fair elections and direct choice of the people.