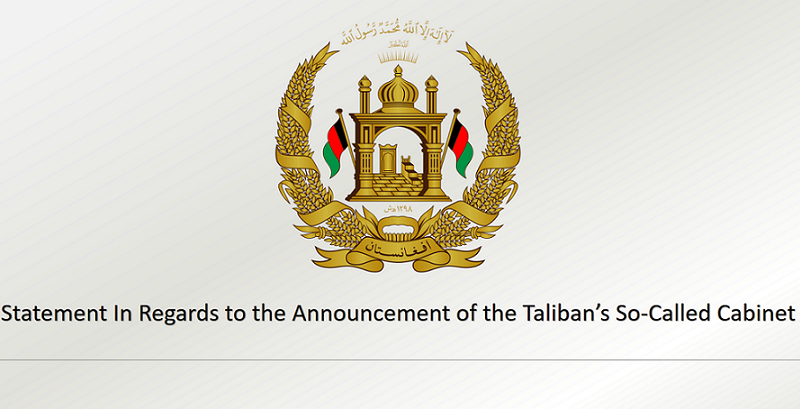 The Islamic Republic of Afghanistan – which emanates from the free will of the people and epitomizes the vision and aspirations of millions of citizens who made the ultimate sacrifice for the cause of sovereignty, freedom and independence of their country – condemns the announcement by the Taliban of its so-called cabinet as illegitimate, unjustifiable and un-Islamic.

The decision goes against the will of the absolute majority of the people of Afghanistan and undermines the national interests of Afghanistan, including security, stability and prosperity of the country and its people.

The announcement of the so-called Taliban cabinet will result in undermining Afghanistan’s political, ethnic and social diversity, lead to increased tensions and also undermine the prospect of a comprehensive and lasting peace in the country.

Moreover, it goes without saying that the Taliban have once again reaffirmed their blatant disregard and violation of the fundamental rights and important role of Afghan women and other segments of the society.

The Islamic Republic of Afghanistan, as enshrined in Afghanistan’s Constitution, as the supreme law of the land, and manifested in the tri-colored flag is cherished amongst all Afghans inside and outside the country and is flying at all Afghan diplomatic missions.  The constitution serves as the main source of legitimacy for upholding and advancing the national interest, territorial integrity, sovereignty, Islamic values and independence of Afghanistan.

All Afghan diplomatic missions will continue their normal functions and duties based on the constitution of the Islamic Republic of Afghanistan.