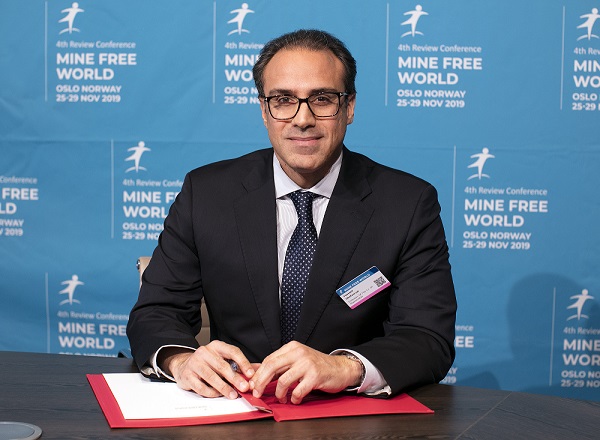 The Fourth Review Conference of the States Parties to the Anti-Personnel Mine Ban Convention on the Prohibition of the Use, Stockpiling, Production and Transfer of Anti-Personnel Mines and on their Destruction was concluded today 29 November 2019 in Oslo, Norway.

On the  27th November 2019 Mr. M. Shafiq Yosufi, Head of Directorate of Mine Action Coordination (DMAC), Afghanistan National Disaster Management Authority (ANDMA) gave a detailed overview of Afghanistan’s implementation of mine-clearance objectives. Confirming 432 sq. km cleared thus far.  He presented an update on implementation of the Article Five of the Antipersonnel Mine Ban Convention, reaffirming Afghanistan‘s commitment and highliting mine clearance achievements as well as  the challenge ahead of it.

Afghanistan acceded to the Convention on 11 September 2002. The Government of Afghanistan developed a detailed plan of action for achieving a mine-free Afghanistan by 2023. As one of the world’s most mine affected countries, Afghanistan is taking concerted action at the national level to become mine free, under a comprehensive national action plan supported by the international community.

In a speacial side event on November 28th 2019, the important role of Afghan women in mine-clearance activities in Afghanistan was celebrated on the margins of the Oslo Reveiw Conference of APBMC. Mr. Yosufi opened the session and set the scene for discussion on mainstreaming gender in humanitarian mine action. Mr. Yosufi underlined the role of Afghan female de-mining teams in Bamyan province achieving mine-free status. He mentioned that it is a great example of women making an impact in Afghanistan. The discussion was enriched by comments from UNMAS, DDG and GICHD who provided examples of gender mainstreaming in projects and highlighted their lessons-learned.

On the same day, during the Victim/Disability Assistance Action Plan session of the Fourth Review Conference the statement of the Government of Afghanistan was delivered by Mr. Zahir Mohammad, Second Secretary of the Embassy of Afghanistan in Oslo, Norway which highlighted acheivements and commitments within the Government system including increasing in support of the Victim Assistance and disability related Programmes at national and local levels. The speech was concluded by thanking the international community, governmental and humuniterian organizations and  other donors who have generously supported victims and person with disability in Afghanistan.

On the 29th November 2019 of The Fourth Review Conference, which was dedicated to renewals of political support the Ambassador of the Islamic Repulic of Afghanistan in Oslo, Norway Mr. Youssof Ghafoorzai addressed the conference, highlighting various aspects of Afghanistans mine-clearance activities, including clearance operations, the proactive role of women in the progress, support for victims and the way forward. He also thanked the international community for the support provided for mine clearance operations including partner countries and agencies and reaffirmed the firm commitment for Afghanistan to fully implement all it‘s commitments under the Anti-personnel mine Convention.

The objectives of the Convention – to save lives, protect civilians, assist survivors, and promote sustainable development in affected areas were some of the aspects highlited during the Fourth Review Conference of the States Parties to the Anti-Personnel Mine Ban Convention . 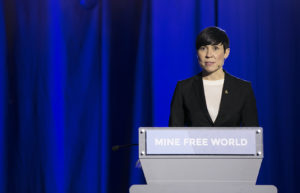 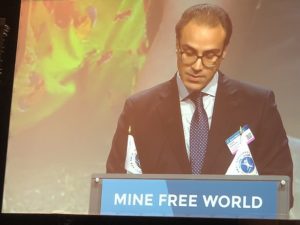 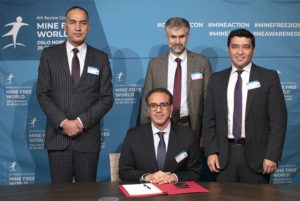