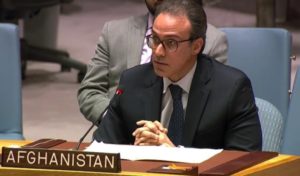 H.E. Mr. Youssof Ghafoorzai is a career diplomat with extensive expertise in international peace and security, post-conflict stabilization, and multilateral institutions. He spent a significant part of his 15 year long career as member of the Ministry of Foreign Affairs of the Islamic Republic of Afghanistan, which includes ten years at the Permanent Mission of Afghanistan to the United Nations in New York, as a Second Secretary (2006-2008); and Counselor (2010-2014; 2016-2019), where he has led Afghanistan’s peace and security mandate, especially at the UN Security Council.

He had also served as Senior Adviser on International Affairs to the Minister of Foreign Affairs.

Working at a time characterized by Afghanistan’s reconstruction and democratic transition, Ambassador Ghafoorzai has represented Afghanistan at various regional and international conferences on peace and stability in Afghanistan and its wider region. He has also led several bilateral and multilateral negotiations on these and other issue in deliberations at the UN and other international settings.

His experience also includes policy coordination between state and non-state actors and working on pressing political, economic and social issues related to Afghanistan and beyond.  Throughout his career, Mr. Ghafoorzai has worked adamantly to ensure the international community’s steadfast support in helping to achieve and consolidate gains across various spectrums.

Mr. Ghafoorzai has recently been appointed as Afghanistan’s Ambassador to Oslo, Norway with non-resident Ambassador status in Denmark and Iceland, as well.

He holds a bachelor’s degree in Political Science and Government from the Queens College of the City University of New York (CUNY) with an emphasis in International Relations and a minor in History.