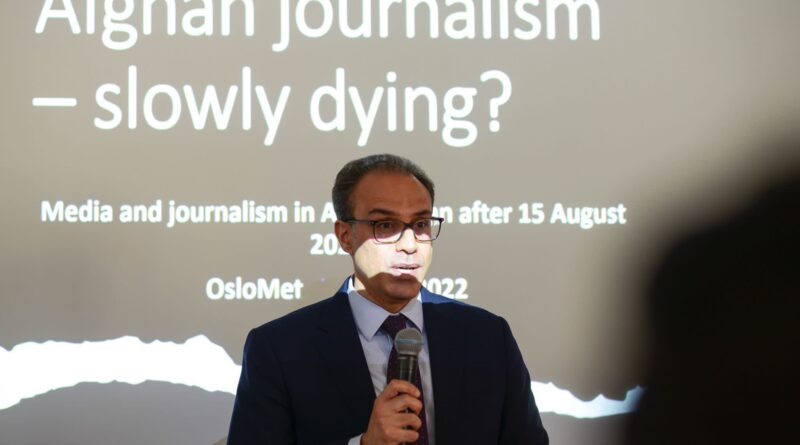 Thank you very much Prof. Eide for hosting this important initiative and the invitation to be here.

We very much appreciate your friendship with Afghanistan – which you have demonstrated in so many ways over the years, and in particular, your support for Afghan journalists in more positive times and now difficult times.

Your initiative to prepare a finding on the status of the media in Afghanistan since the Taliban’s forced takeover of Afghanistan in August last year is most welcome and appreciated. I also thank all other colleagues who contributed to this important project.

As friends of Afghanistan – and those who have either followed or worked on issues in the country, you are well aware that Afghanistan’s media sector was one of the most important aspects of Afghanistan’s “extraordinary transformation” over the past two decades.

Before the Taliban’s takeover in August, Afghanistan was home to more than 130 television outlets and hundreds of radio stations, newspapers and online platforms. Afghanistan had the most open and liberal media not just in the region, but across continents.

This was an achievement which the absolute majority of Afghans – from across political and social spectrums, were proud of, supported and defended.

Beyond keeping the public informed, providing people with consistent access to information, and enforcing a spirit of accountability for governance, Afghanistan’s media sector is also vital in “re-generating the culture of democracy,” which has been a dominant part of Afghanistan’s society and polity for several generations.

In past years, the media sector was “the driving force behind the emergence of a vibrant and talented new generation of civil society and youth,” which proved their “readiness and ability” to consolidate democracy in their country and take on leadership positions in the future.

Unfortunately, the media landscape in Afghanistan now faces a much different situation – as is the case with most sectors and institutions in the country.

More than 230 media outlets have shut down. This represents approximately forty percent of all media platforms. Close to 7,000 journalists have lost their jobs. While the ramifications of this regression are wide-ranging, Afghan women have been most affected. They have also borne the economic brunt of this regression, by being instructed or coerced into leaving their positions.

The tragic images from August 2021 of the hundreds of thousands of Afghans rushing to Kabul international airport is still fresh in our minds.

Hundreds of journalists – many of them from the dynamic new generation of Afghans – were among the hundreds of thousands who made the difficult decision to leave their country due to uncertainty, hopelessness and fear for their lives – and those of their families.

Since then, there have been many accounts of journalists being detained for simply exercising their fundamental right of reporting on events in their country.

Journalists covering women’s demonstrations have been a particular focus for the Taliban.  Several journalists apprehended – remain in custody, and we call for their immediate release.

In the past few weeks, there have many reports of media stations in several provinces have been turned into madrassas – or religious schools – preaching something that is not in accordance with the true tenets of our great religion, Islam.

Regression of the media sector is but one component of the catastrophic situation now faced by the people of Afghanistan.

A population of more than 40 million is now facing a dire situation and enormous uncertainty.  Suppression of fundamental rights, including grave human rights violation; physical and psychological insecurity and lack of legitimate governance have converged into a human tragedy – rarely seen in the history of this great and proud nation.

The real impact of the media sector being weakened speaks to larger point – which is often missed or underestimated:

A large part of the current instability and lack of progress in resolving the situation has to do with the fact that: “the concerns, wishes and aspirations of the people are intentionally being neglected by the Taliban for mis-perceived political gain.”

This includes their demands on their God-given human rights, their social and economic well-being, and their desire for a political settlement to what primarily remains a “political crisis and conflict” in the country.

In January, a delegation of Afghan civil society highlighted these issues in discussions with the Taliban here in Oslo.  Unfortunately, the Taliban have failed to respond positively to any of the core issues raised in those talks.

History has shown that stability is only possible when people are convinced that their concerns and views are heard, acknowledged and taken into account and when ensured that their position has an impact on shaping policies to serve the interests of their nation.

In Afghanistan, the media was one of the most important outlets reflecting the concerns and demands of the people. Measures to suppress the media equates to denial of the people’s wishes and aspiration, and this has resulted a growing sense of frustration, anxiety and tension among ordinary Afghans.

In light of the current situation, it has never been more important to respect the views and concerns of the people. Permitting the media to operate freely is an important part of the broader imperative of respecting the rights and will of the Afghans concerning all issues which are important to them – and which are vital for resolving the current crisis in order to achieve a truly peaceful and democratic Afghanistan.

Let us not forget, Afghanistan is a young nation. Close to 70% of the population is below the age of 40 and with 50% of population living in the main cities and still committed to democratic values.

The people of Afghanistan remain committed to see their country back on the path of stability.  This commitment grows stronger and stronger each and every day.

History has shown that all Afghans have always stood defiant in the face of the most difficult challenges. They overcame then and they will overcome again.

Thus far, the international community has demonstrated enormous compromise with the Taliban – who have interpreted this as weakness and chosen to harden their positions.  A new line of approach is now needed if there is to be a change in the Taliban’s approach.

The collapse of the peace process in Doha marked a historic opportunity missed to end a four-decade long conflict. But the people of Afghanistan have not given up hope on a political settlement.  And neither should the international community.

Absent a national political consensus and understanding, leading to the formation of a broad-based and fully inclusive government, the situation in the country will worsen and the people’s struggle for self-determination and restoring the honor and dignity of their nation will only grow stronger.

I will conclude paying tribute to the memory of all Afghan journalists who lost their precious lives as a result of depraved attacks by terrorists and extremists over the past two decades and to reaffirm the need stronger international solidarity with and support for the many brave journalists who preserve in the face of unimaginable threats and other difficulties.

Our collective support for them means supporting justice, peace, human rights, the rule of law and other values that are important to all of humanity. 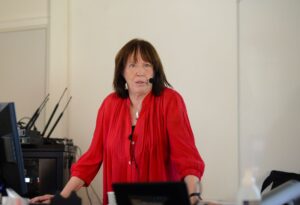 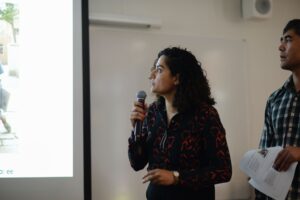 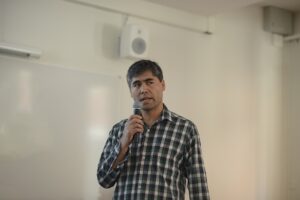