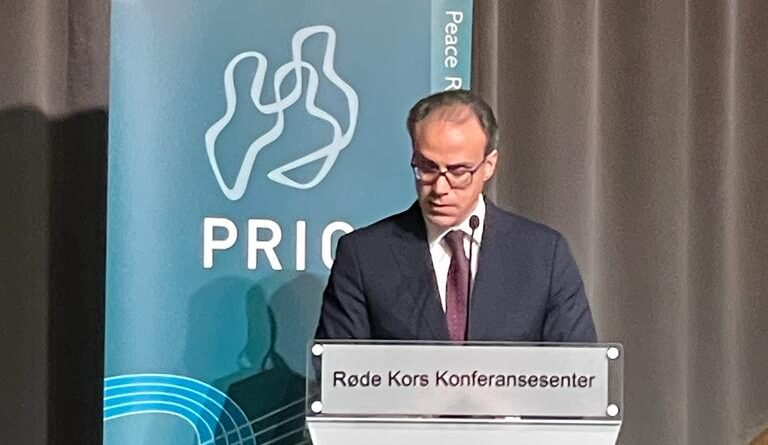 Let me first thank the Norwegian Afghanistan Committee and other partner institutions for organizing this year’s Afghanistan Week which brings together a very good group of activists, journalists and experts for discussion on Afghanistan.

I convey a special thanks to Her Excellency Foreign Minister Anniken Huifteldt for her expression of strong support for Afghanistan and our people.

Norway’s commitment to Afghanistan at this difficult time is valued and appreciated by all people of Afghanistan.

I also thank the panelists who shared their perspectives on how best to support a process that can meet the urgent needs of our people, including their right to live real in real peace and to have their aspirations met.

Afghanistan has faced a very dire and difficult situation one of uncertainty; grave human rights violations; and other policies that have undermined the spirit of national unity and contradict the true tenets of our religion Islam.

But our people have not lost hope.

They are confident about overcoming the current challenge; reaching a point of stability, and again being able to determine their political destiny.

In the past year and a half, the world has seen how Afghans from all walks of life display the courage and resilience that they have always shown in times of difficulty.

They have defended national values to which they have always been committed such as fundamental rights, liberty, and the right to self-determination.

Afghan Women and civil society have been the face of this now historic struggle despite threats and intimidation.

Their cause is about something more than just their own rights.

It’s about defending the rights of ALL Afghans.

And it will be remembered in history as standing for what’s right and what’s desired and deserved by all peoples around the world.

Thus this year’s Afghanistan-Week can be seen as a tribute to the courage of Afghan Women who have also been an inspiration around the world.

Meanwhile, let us not forget that their cause is no different than the cause for which many precious lives, from many countries, including Norway, were lost.

So tonight – I also want to pay tribute to their memory and that of our Afghans, which should be another inspiration for all of us to help set Afghanistan on the path of stability.

Despite what has unfolded the joint sacrifices made are not entirely in vain.

Because it helped create conditions for the emergence of a new generation of Afghans who have a real and deep belief in democracy, and who are now working passionately to impact the future of their country.

That commitment is reflected in the courage of young students who survived the terrorist attack at Kaj Educational Center in Kabul, which killed more than 60 students.

Fatima Amir, a 17 year-old teenager  who was left severely injured, losing one eye went on to take her university exam, less than two months after the attack.

Even-though passing with very high numbers, she expressed disappointment for not being among the top 10 – nationwide.

Meanwhile, one of her classmates, Mohammad Zia, who was also present during the attack, scored the 4th highest among all students across Afghanistan.

This is reflective of our people’s determination to face adversity and to overcome.

But it also symbolizes the way in which Afghanistan’s international friends, including Norway, helped to impact a changed and empowered society.

The question and challenge now, before all of us, is how to set Afghanistan on the path of stability.

Meanwhile, we know that the return of a normal situation will take time, but also requires international support.

Afghanistan-Week here in Oslo demonstrates that Afghanistan remains a focus for Norway and other international friends.

This week’s discussions can help provide perspective on factors that led to what transpired, but more importantly, on what now needs to be done to achieve stability.

Despite varying views on different aspects of the situation, there is one common understanding.

That stability in Afghanistan is only possible through legitimate governance that’s able to represent the people’s aspirations.

Meanwhile, history has proven that imposed rule – in any part of the world – is never sustainable, nor acceptable. This needs to be recognized by the Taliban.

Thus, should the group desire acceptability as part of a broader national set-up, they must respond to the people’s demands:

Respect for the rights of all Afghans, including women and minority groups;

The absolute majority of the people are still in favor of a political agreement.

We believe Norway and the international community have an important role to play in all areas, including for the start of a political process that can lead to the formation of a broad-based and inclusive government that strengthens national unity.

Moreover, we also hope to see a new consensus take shape in the UN Security Council on the way forward in Afghanistan. This will be imperative for any improvement in the situation towards stability.

At the same time, the people of Afghanistan are very much able to ready to take charge and responsibility for their country’s future. But they need to be supported by the international community.

They look to the international community to continue to support their cause, which represents Afghanistan’s interests, but also the interests of global stability.

I once again thank all friends here in Norway and elsewhere for making this event possible.