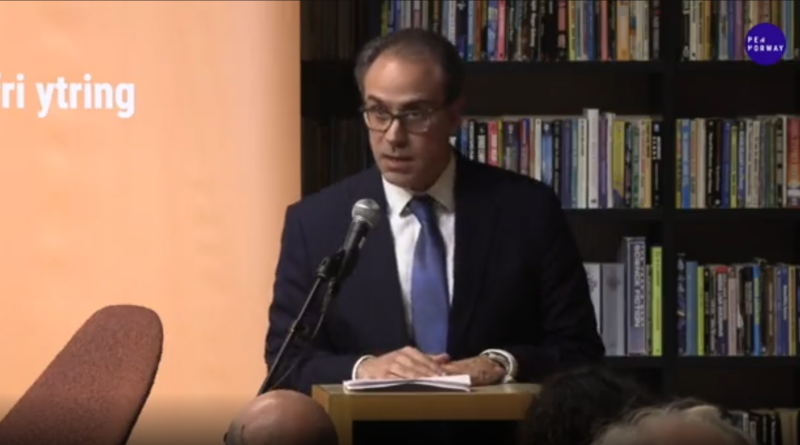 Let’s first start by thanking Norsk Pen for holding today’s very important discussion on the situation in the Afghanistan: “What About Afghanistan’s Future,” and congratulating Afghan Pen on the 20th anniversary of its inception, as well as for its important work in support of Afghan writers, artists and other intellectuals.

The work of the Committee is part of several important partnerships between Afghanistan and Norway, which reflect an important point – that despite the tragic events of August of last year – Afghanistan is still a focus for some of its closest friends.

But to a larger point: these partnerships symbolize the fact that the effort between the Afghan people and their international friends to reach a point of stability in our country continues.

We’re very pleased to have with us this evening – two respected and distinguished personalities in Dr. Sima Samar and Dr. Spanta – both of whom have proven their dedicated service to their country and people.

The points they raised are very much in-line with the message that the absolute majority of the people of Afghanistan are speaking to the international community for a way out of the current chaos.

Ending grave human rights violations, including a form of gender apartheid and other grave violations;
• Upholding the fundamental rights of Afghans – especially women, girls and minorities;
• Enabling people to decide on their future through elections;
• And creating the environment where all Afghans – from all ethnic groups and parts of Afghanistan – are able to live as equal citizens with equal opportunities before the law.
The photo exhibition which will now be seen reflects the picture of an Afghanistan in more stable times and – in a way – some of the important gains of the past two decades – prior to the Taliban’s takeover.

Of course – the emergence of a new class of young civil society, including writers, journalists, photographers and civil servants is perhaps one of the most important aspects of these gains.

Afghanistan’s new generation is among the hundreds of thousands of Afghans – inside and outside Afghanistan – now defending national values. Those in Afghanistan are doing so with their lives at risk.

This new generation of leaders must be supported and empowered to help impact a stable and democratic future for Afghanistan.

Moreover stability in Afghanistan can only be possible with a legitimate and inclusive and governance that reflects the wishes of the people.

So far, the Taliban have been very much unwilling to commit to a political solution with figures and groups outside their own.

They have pursued an ill-fated narrative of resolving issues through military means and imposed rule.

This approach has led to more anger and opposition among the people and a political, security, economic and humanitarian crisis that has deepened.

Meanwhile, the desire for a political solution among the Afghan people is still strong.

The international community should use all leverage that is available to influence the Taliban to commit to negotiations.

Moreover, for any agreement to be responsive to the current situation, must include agreement on core issues such as:

• The rights of all Afghans, especially women and girls, and minority groups;
• The constitution of the country;
• The composition and mandate of a broad-based government;
• The future political system under which Afghanistan is to be governed;
• And of-course – the holding of elections for people to decide their future.

In the meantime, the international community should start a sustained & structured dialogue with responsible political actors and groups from across various ethnic groups who are committed to advancing Afghanistan’s national interest.
And should the Taliban not be interested in a national agreement, Afghanistan is not short short of committed citizens who are ready to play an important role for the future of their country.

Let me conclude by reiterating an important fact that needs to be highlighted – that the Taliban may be a group of forty-thousand but the Afghan nation is a population of forty-million. Let us work together to help uphold their will.
Now without further adue, we hope you enjoy the exhibition.
Thank You.