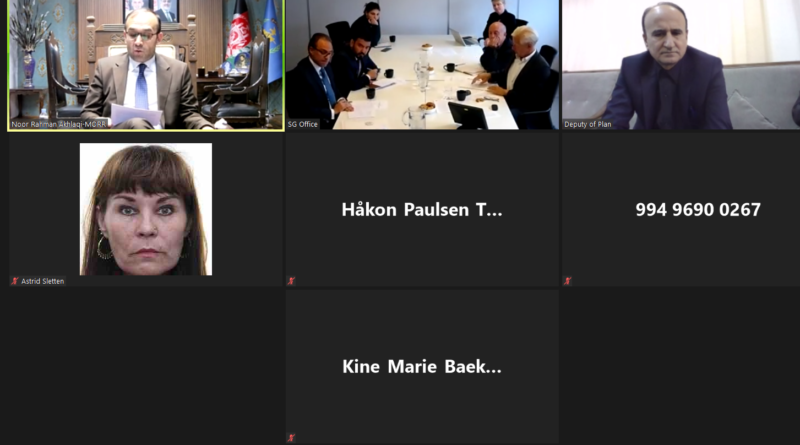 On August 10th, the Afghan Embassy in Oslo, held a joint meeting with Norwegian Refugee Council (NRC) and the Afghan Ministry of Refugees and Repartition on the humanitarian situation and support for IDP’s in Afghanistan.

In his opening remarks Ambassador Ghafoorzai recognized the historic contribution of NRC in Afghanistan. He added that the Embassy of Afghanistan in Oslo has been focused on coordination with Norwegian government agencies and other NGO’s and bilateral organizations. Ambassador Ghafoorzai underscored that the discussion is particularly important because the security and humanitarian situation in the country – which continues to deteriorate at an alarming rate, due to continued Taliban attacks. The unprecedented level of violence and insecurity since 2002 has placed millions of Afghans in a very difficult situation, not only from security standpoint but also from a humanitarian aspect as well.

He further brought to light that the refugee crisis of immense proportions is drastically increasing as a result of increasing attacks and violence in the cities and province in Afghanistan from the Taliban. In that regard, Ambassador Ghafoorzai stated that over two-thousand civilians have been killed in the past two months alone; a 50% increase in civilian casualties since has taken place since last year; 300,000 IDP’s since the start of the Taliban offensive in mid-April – of which 80,000 are children; the total number of IDP’s now approached 5 million – and 18 million people are in need of emergency humanitarian assistance. Recent attack in Herat, Kandahar, Helmand, Nimroz, Badakshan and other parts of northern Afghanistan have driven thousands from their homes and villages. The number of displaced is increasing daily. The Ambassador further highlighted the humanitarian aspect of the ongoing conflict in Afghanistan and the high number of civilian casualties, the climate-change affects, the effects of natural disasters and the Covid-pandemic profound impacts on economy.

Ambassador Ghafoorzai further expressed that Afghanistan has called on the international community to respond to the urgent situation on the ground, especially ensuring the end of Taliban attacks through a ceasefire, and influencing the group to honor all commitments under the Doha-agreement and SC resolution 2513, including reengaging in peace talks in good faith for a political settlement based on the will of the people. For that he further added; “if this doesn’t occur:  the situation runs the risk of turning into an all-out humanitarian catastrophe of even greater proportions.”

The Ambassador ended his opening remarks by expressing his gratitude for having the joint discussion. The Embassy hopes that the discussion could also lead to identifying areas where NRC assistance programs in Afghanistan can be adjusted to meet the immediate and urgent priority needs at this difficult time – with the hope of also seeing an increase in the scale of assistance.

Following Ambassador Ghafoorzai, Mr. Noor Rahman Akhlaqi, Minister for Refugees and Repatriation of Afghanistan gave a very detail account of the humanitarian situation in the country, including the grave human right violations committed by the Taliban, the deteriorating humanitarian situation of IDPS, the activities of the government, particularly the ministry for refugees and repatriation, to the urgent priority needs in relation to IDPS. The figures stating the number of refugees and IDPS are staggering, and the collective international response is now necessary to meet the need of the people and prevent the situation from worsening.

Mr. Jan Egeland, Secretary-General of the Norwegian Refugee Council and Ms. Astrid Sletten, NRC Country Director in Afghanistan, gave an overview of the historic and current work that the NRC do in Afghanistan. Ranging from focusing on IDPS and refugees; education; livelihoods & food security; water, sanitation & hygiene; gender & protection; camp management; and legal assistance.  Mr. Egeland reinformed that the NRC not only will stay, but is committed to scaling up their assistance programs. He spoke about the NRC wanting to keep its presence in regions all over Afghanistan, thus continuing its humanitarian assistance in Balkh, Faryab, Herat, Kabul, Nangarhar, Kunar, Kandahar, Khost, Sar-e-pul, Kunduz, Bagdhis, Laghman, Nimroz, Parwan, Zabul, Uruzgan. He signaled that the NRC support and partnership with Afghanistan will continue moving forward.

Adding to the discussion, Mr. Sher Alam Amlawal, Deputy Minister for Refugees and Repatriation Afghanistan, delivered his remarks. He spoke in more detail about the technical aspects between the ministry and the NRC, in relation to different projects. The minister also said that, at this crucial juncture, the people of Afghanistan should not be forgotten by its international partners. The minister hailed the important cooperation between the ministry and NRC, stating that it ensures an important continuity moving forward.

Also joining the meeting was Mr. Kai Eide, former UN Special Envoy to Afghanistan who spoke about the importance of a unified international position to improve the current situation, which enquire a political settlement. In that respect, the highlighted the important role of the UN to achieve this objective. While also referring to the upcoming renewal of the UNAMA mandate by the UN Security Council as an opportunity to bring necessary adjustments in the UN activities in order to better respond to the current challenges in Afghanistan.

Ambassador Ghafoorzai ended the joint discussion by thanking all participants for taking time and for their important contributions. He expressed particular gratitude to Secretary General Egeland for co-hosting the joint discussion, and thanked him for his personal commitment in support of refugees and IDPS, but more broadly for peace, development and prosperity in Afghanistan. The Ambassador stated that the meeting was useful in enabling an exchange of views on the important work of the NRC in Afghanistan and the collaboration between the organization and the Afghan ministry of refugees. He expressed confidence that today’s meeting will build on the already close cooperation between the NRC and the ministry, and lead to greater alignment of assistance programs with urgent needs and priorities, resulting from the current situation.