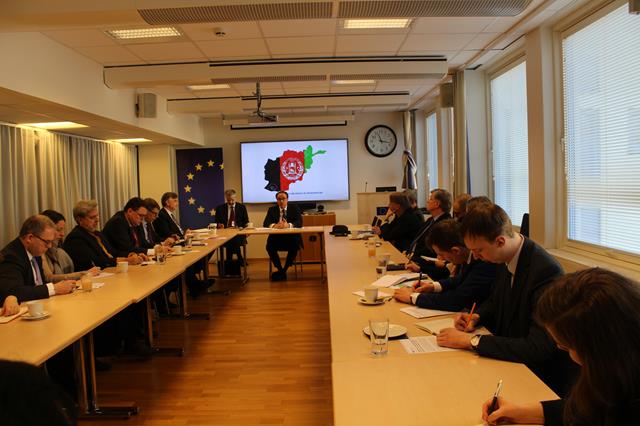 Today, 5 March 2020, Ambassador Youssof Ghafoorzai held a briefing on the current state of Afghan-led, owned peace efforts for a just, durable and lasting peace in the country. The briefing was attended by Ambassadors and other representatives of Embassies based in Oslo. Also in attendance were senior officials of the Norwegian Foreign Ministry.

Ambassador Ghafoorzai highlighted the principled position of people and Government of Afghanistan in regards to the ongoing peace efforts. He gave an overview of the foundational measures taken over the past 3 years, in particular, to advance a successful process that meets the demands and expectations of the people of Afghanistan.

In light of recent developments, the Taliban had an opportunity before them to meet the expectations of the people and government of Afghanistan, as well as Afghanistan’s international partners in delivering on their expressed commitments for peace.

“Peace building is not an easy task in any environment. It requires confidence building in different phases and levels – through various initiatives and measures. We are approaching the process in a step by step and phase by phase manner and with a great degree of responsibility and focus for efficiency in order to achieve the desired outcome,” said Amb. Ghafoorzai.

He highlighted Afghanistan’s major transformation into a pluralistic society that have come with enormous sacrifices by the people of Afghanistan and the international community in the past nineteen years and asserted that the consolidation of democracy would remain an imperative in the way forward.

Moreover, he emphasized core principles and values that are embedded in Afghan society such as preservation of the Republic, consolidation of democracy, protection and promotion of human rights, women’s rights in particular, as well as the advancement of the pluralistic society would in no way be compromised in any potential peace agreement.

He thanked the international community for it’s support for an Afghan-led, owned and controlled peace process and highlighted the importance of efficient coordination with the Government of Afghanistan to achieve the shared goal of a just, lasting and dignified peace in Afghanistan.