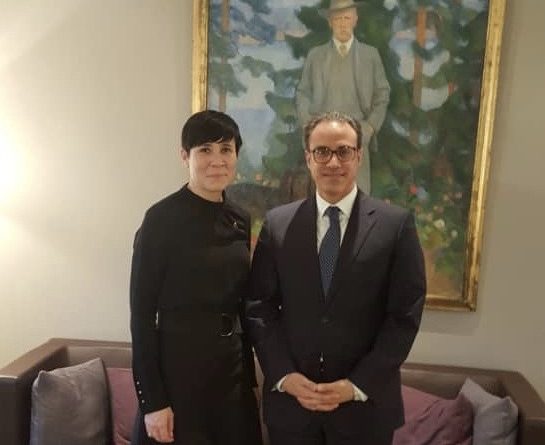 Ambassador Ghafoorzai today met with H.E. Ine Marie Eriksen Søreide, Foreign Minister of Norway at the Ministry of Foreign Affairs.  They discussed the situation in Afghanistan, including security, ongoing efforts in support of Afghan-led peace efforts, elections and Afghanistan-Norway bilateral relations and cooperation.

Ambassador Ghafoorzai highlighted Norway’s assistance and contributions as an important pillar of the international community’s engagement in Afghanistan. He stated that Norway’s multi-sectoral support had played a very tangible role in the emergence of a new Afghanistan that had emerged, in which democratic values and principles had taken root in society and where the younger generation were steadily taking charge of the country’s future.

Norway is among key international partner countries providing support in the areas of security, development, governance, human rights and women’s empowerment.  He also expressed gratitude for Norway’s support in the area of Afghan-led peace efforts, which remained a priority area of focus for the Government of Afghanistan and encouraged increased economic cooperation including private sector investment.

Foreign Minister Soreide hailed the important gains that had taken place in Afghanistan over the past several years and reaffirmed Norway’s support for peace, stability and development in Afghanistan as part of the international community’s continued engagement in the country.