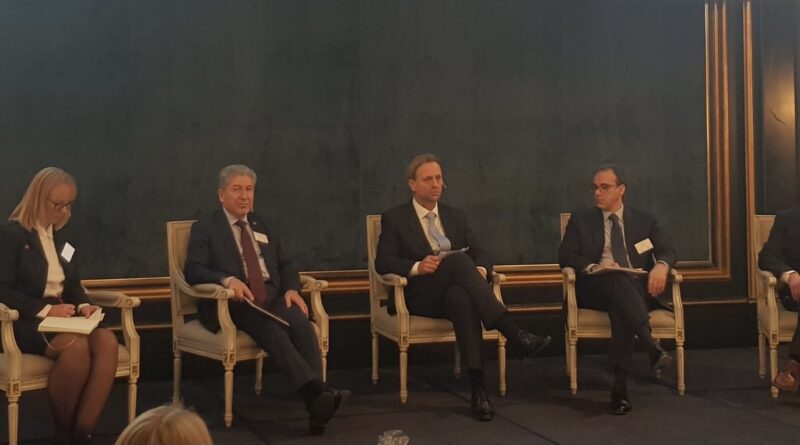 On 19th October 2020, Ambassador Ghafoorzai participated in the “Annual Embassy Seminar on Assisted Voluntary Return and Reintegration in Norway,” hosted by the International Organization for Migration (IOM) and the Norwegian Directorate of Immigration (UDI).

Participants included Norwegian Officials from the UDI, Ministry of Justice and Public Security, National Police Immigration services, Senior Officials of the International Organization of Migration (IOM) Office in Norway, in Ethiopia and Romania and Head of the Migration Protection and Assistance of IOM in HQ in Geneva.

Addressing the panel discussion of the seminar, Ambassador Ghafoorzai started his remarks by thanking IOM, UNHCR and other development actors for their continued partnership and support, which has facilitated the return of millions of Afghans in the last years, mainly from neighboring countries, but also from abroad.

For such return and reintegration to be successful and sustainable in any setting, the right conditions in the ground are required, as well as the peoples’ confidence about the country’s future direction. To that end, the partnership between Afghanistan and the international community had enabled the return of close to ten million refugees from abroad since 2002, mainly from neighboring countries Pakistan and Iran. The important work of international partners such as IOM and UNHCR is essential in that regard.

The high return rate was the product of important gains made in various sectors of society in the past two decades. Afghanistan was not engaged in a peace process for a lasting and dignified peace, the successful outcome of which would further improve return and reintegration from abroad. The Afghan Government’s approach wasn’t just on peace-making but also peace-building which included a focus on new social and economic opportunities to consolidate and make peace sustainable. Afghanistan’s new Afghan National Peace and Development Framework (ANDPDF) would be presented at next month’s Geneva Conference.

He also shed light on Afghanistan’s national strategy on combatting human smuggling and trafficking which was a source of the problem of illegal migration. Ambassador Ghafoorzai also described the steps the Government of the Islamic Republic of Afghanistan is taking to combat human trafficking and smuggling, including the Inter-Ministerial Commission to Combat Trafficking, the Public Awareness Campaign, and the health and social services package offered to victims of trafficking and smuggling. Afghan authorities had identified and apprehended over a thousand traffickers and prosecuted them under law.

As key points of observation, he underscored the need for decisions on relevant asylum cases to take into account the impending security situation on the ground, be duly collaborated with Afghan government authorities; and address cases of vulnerable groups with extra focus and attention and in a spirit of greater flexibility in light of current circumstances. That said, he underscored the government’s commitment to the implementation of the Afghanistan-Norway-UNHRC tripartite agreement and looked forward to closer collaboration on related issues.

Ambassador Ghafoorzai also called for broader coordination between embassies, UDI, IOM and other actors involved in migration. Coordination, outreach and information sharing will benefit the accuracy of information, such as identities, passports and conditions on the ground.

Ambassador Ghafoorzai finished his remarks by bringing into greater attention and focus worldwide on the benefits of migration, rather than only its challenging aspects. He pointed that Afghan migrants not only integrated in their communities of adoption, but also bring innovative ideas, talent and contribute to the societies they live in.