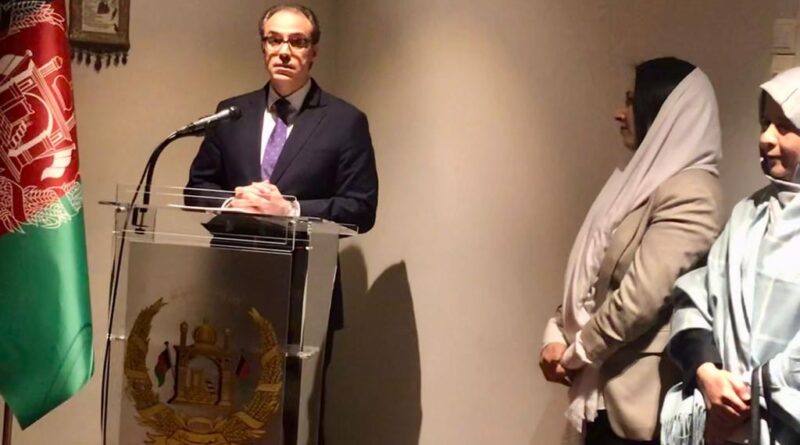 It is an honor to welcome you all this evening, on a special occasion –  commemoration of International Women’s Day.

Thank you all for being with us, but more broadly – for your solidarity and support for the people of Afghanistan, especially women and girls, at another very difficult time in our nation’s history.

I also take this opportunity to convey our solidarity will all women around the world facing a difficult situation, especially in conflict situations:  in Ukraine and elsewhere.

We’re also very pleased to have with us tonight, many friends from non-governmental organizations with whom we have partnered with in various areas, including democracy, women and youth empowerment, humanitarian assistance and education:

The Norwegian Refugee Council, the Oslo Center, OsloMetropolitan and NMBU Universities, the Nordic Women’s Mediators Network and other organizations.  We value your solidarity and support.

This year, International Women’s Day comes at a moment of great uncertainty and challenge for the people of Afghanistan and Afghan women, in particular.

We all are aware of the situation since the 15th of August.  Political uncertainty, grave human rights violations, of women and girls in particular; a devastating economic and humanitarian situation, and insecurity are a dark reality in present-day Afghanistan.

In the past many years, Afghan women have proven to the world that they are among the most courageous, most talented and most committed, and that when given the chance – they will deliver and impact the development of their country and society.

In government, in parliament, in the media, in civil society, in the education, health and other fields, they served with the strongest of commitment and influenced different aspects of Afghanistan’s political, social and economic life.

Clearly, the international community helped make these gains possible. Thousands of lives – of fathers, of mothers, sons and daughters – perished in a historic sacrifice to help ensure that millions of Afghans were able to exercise their civic and democratic rights.

In this regard, defending women’s rights and democracy in Afghanistan can now be seen as a tribute to the memory of all precious lives lost in that endeavor – of Afghans and their international friends alike.

Tonight, we have with us several courageous women activists from Afghanistan:

Ms. Shah-Gul Rezaeh, Nargis Nehan and Hoda Khamosh – each of whom has courageously advocated for not only the rights of Afghan women, but values that are important to all Afghans – and to all countries that believe in democracy.

In a unique way, they are working in line with the spirit of what past and historic figures such as Soraya Tarzi, Rabia Balkhi, Malalai Maiwand, Naheed Shaheed and other such personalities committed to achieve- in defending national values and promoting democracy in Afghanistan.

In previous negotiations with the Taliban in Doha and recent meetings,  Afghan women spoke courageously and defended Afghanistan’s national interests.

They sought to reach a peaceful settlement that was practical, that considered the realities of a new Afghanistan, and that would be acceptable to the absolute majority of the people – and the international community.

This – of course – is not to say that there weren’t challenges prior to August 15. The challenges and constraints women faced, were indeed many, including social barriers.

But the overall situation was such that they were able to pursue their aspirations, based on the constitution and the true interpretation of Islam.

Unfortunately, the situation now is much different. And women are among the most affected by what has taken place.

From a human rights standpoint, reprisal killings, forced disappearances, intimidation and detention of women activists, preventing and or restricting their access to education and work, and not allowing them to leave home without a male escort have – unfortunately –  become a norm.

No one imagined that conditions of pre-2001 Afghanistan would come again.  But they have and this is now the reality and challenge that the people of Afghanistan and the international community are faced with.

From a humanitarian standpoint: Afghan women – including those heading single-parent households are wondering what to do and how to provide for their children who lack the most basic of services.

Women in profession in the health, education and other sectors have – in most cases – been restricted from continuing their duties.

Afghanistan is a proud nation that has overcome the most difficult of challenges throughout its history. This was possible with national strength, unity and determination.

In times of crises – when Afghanistan’s sovereignty and territorial integrity were at risk – Afghan women always displayed strength and in many cases were the spark of what would later become a heroic struggle for liberation and freedom.

The same strength is now seen in images of courageous Afghan women activists who –  under enormous pressure, intimidation and threat – are demanding their God-given fundamental rights to live free  –  as equal, productive and influential members of society – as other women worldwide, including in Islamic countries.

This spirit is also seen in the work of women activists in the Afghan diaspora community abroad – who have also made their voices heard in support of women’s rights and a democratic and pluralistic Afghanistan.

Some of them are also here with us tonight.  I wish to recognize Farida Ahmadi, Hasina Sherzad,  Samina Ansari, Farzana Elham Kochai, Meetra Asee and Hamida Mirzada.  I hope not to have missed anyone. And if I have – please accept my apologies.

They have been an important part of our work at the Embassy to advance the values to which all peace-loving nations in the world are committed.

And of course, to female colleagues at the Embassy who have been a central part of this effort:  I’m grateful for your tireless efforts and dedication to keep moving forward, despite difficult conditions at the Embassy.

In the broader context, the women of Afghanistan are advocating something THAT ALL AFGHANS DESIRE – to live free and to be able to determine their political destiny.

And history will again point to their courage as the starting point of another national effort that eventually leads to the restoration of Afghanistan’s standing as a stable and democratic society.

Moreover, what we have seen playout in Afghanistan does not reflect the true identity of the country.  I can say with pride and confidence that Afghanistan and its people, have embraced democracy and its values throughout history.

Afghan women have made contributions in all areas, including innovation, the arts and science and technology.

In recent years, we have seen the same degree of courage and commitment.

The examples are many. Mrs. Shakar-Dokht Jaffari, a medical physicist was recognized globally for her invention of radio-therapy treatment of cancer in 2017. She planned to open the first radiotherapy departments  in Afghanistan upon return.

The “All-Girls Afghan Robotic team” – formed in 2017 – is another shining example of the power of women’s education.  This talented group of young teenage girls built a low-cost ventilator to help treat the Corona Virus during the peak of the pandemic.

They won awards at international competitions and brought home honor and pride to all Afghans. The team is now in Doha, Qatar continuing their studies but still very much committed to the future of their country.

In culture and arts, the all-girls Orchestra team “Zohra” has conveyed the message of peace and harmony in performances worldwide.  As Ambassadors in the area of arts, they have helped revive and represent Afghanistan’s true and rich culture to the outside world.

These are some examples of the new Afghanistan that emerged. And with 70% of the population now under the age of 40 and committed to democratic values – one can imagine the direction they want to see their country head into.

We also want to thank the Kingdom of Norway for its important contributions in support of women’s empowerment in Afghanistan.  This role is also reflected by the launch of the Oslo Symposium on Women’s Rights in 2014 – which was an important platform for very open and very frank discussions on how best to advance the role of women in all areas.

Many other countries have also made important contributions with respect to democratization – including those that are present here tonight. We appreciate your support, which has NOT been in vain.

In these past 6 months, the people have waited for and still await for the Taliban to respond positively to their expectations:   respecting the rights of all Afghans, women and girls especially, and accepting a political agreement with all political actors and civil society that will  put Afghanistan back on the path of stability, democracy and self-determination through eventual elections.

Norway has for many years been working to help advance such a process with support in the area of peace diplomacy.

Last month here in Oslo, many of the shared demands of the people of Afg. and international community were presented to the Taliban. Two months have gone but there has been no visible sign of a positive response.

The Taliban still have a historic opportunity to act and decide in the interest of the people.   If they fail to do so, they will be held accountable by the people and risk having any relevance whatsoever in the future of Afghanistan.

We hope the international community will leverage necessary influence on the Taliban, starting with stronger political messaging, to help see that they choose the path which is expected from them.

It’s also important to note that the people have decided on democracy as the only form of governance for the future of their country.

They have fought for and made the ultimate sacrifice for these values, together with the international community. And they now see no alternative to what has now become embedded in their hearts and minds – democracy.

I will conclude by thanking all women, from Afghanistan and around the world, for your patience, your courage, your wisdom and your leadership.

Let us celebrate women and their achievements today but also reflect on the important work that remains to be done, in Afghanistan and around the world to uphold the rights and well-being of all women worldwide and to ensure their empowerment.

With that: Happy International Women’s Day!