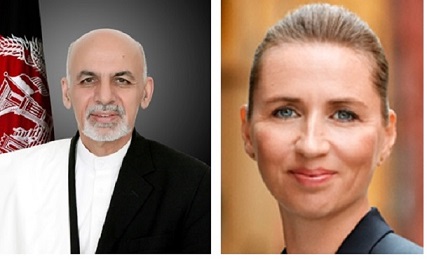 President Ghani has extended his cordial greetings and felicitations to the government and people of Denmark on the occasion of Denmark’s Constitution Day, June 5th. President Ghani expressed pleasure that the existing relations and cooperation between Afghanistan and Denmark have further expanded and strengthened as a result of joint efforts.

President Ghani stated that Afghanistan greatly valued the friendship and support of Denmark, which, among other international partners, has consistently supported Afghanistan’s efforts to achieve peace and stability.  He also expressed pleasure that the existing friendly Afghanistan-Denmark relations and cooperation have further expanded and strengthened as a result of joint efforts and expressed hope for the further expansion this cooperation and partnership in the way forward.

President Ghani further conveyed his best wishes for the good-health and continued success of Prime Minister Frederiksen, as well as the welfare and prosperity of the people of Denmark.

On the same occasion, Foreign Minister Mohammed Haneef Atmar, also extended congratulations and best wishes to his Danish counterpart, Foreign Minister Jeppe Kofod.  He stated that the people and the government of Afghanistan are grateful for the invaluable support and cooperation of the Kingdom of Denmark in the areas of good governance, education, human rights, lasting peace and stability in Afghanistan.

Denmark’s contributions to Afghanistan during the past decades have been a key factor in many positive changes in the country. Denmark reaffirmation of commitment to and partnership with Afghanistan at the international Geneva Conference in November and the forthcoming renewal of the Afghanistan-Denmark Strategic Partnership Agreement (SPA) for an extended period is testament of the enduring bilateral partnership.

The Afghanistan-Denmark SPA spans the areas of political, security, economic and development cooperation, good-governance and the rule of law, regional cooperation and migration.