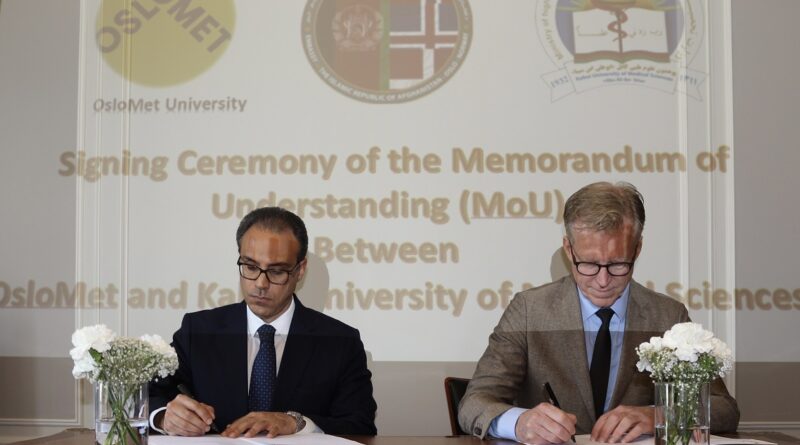 Today, June 11th, the Embassy of the Islamic Republic of Afghanistan in Oslo facilitated the signing ceremony of a Memorandum of Understanding (MoU) between Oslo Metropolitan University and Kabul University of Medical Sciences to mark the beginning of a long-term partnership between the two institutions in the areas of prosthetics, orthotics, and orthopedic engineering.

The signing of the MoU took place at the Embassy of Afghanistan in Oslo, with participation of Ambassador Ghafoorzai as host, Dr. Curt Rice, Head of Oslo Metropolitan University, Professor Waheedullah Mohmand, Head of Kabul University of Medical Sciences, and heads of relevant faculties and departments of both universities.

In his opening remarks, Ambassador Ghafoorzai highlighted the importance of the event in formalizing the start of a long-term partnership and collaboration between the two un

iversities within a variety of academic research and education in the field of health science, with a specific focus on prosthetics and orthotics, orthopedic engineering and motion analysis. The Ambassador stated that the start of any collaboration between agencies, organizations and institutions is beneficial to share experience, build capacity and advance progress in areas of mutual interest. “Yet, the signing of today’s MoU has special and particular value because of its purpose, which is aimed at supporting the needs of Afghanistan’s disabled persons,” said the Ambassador.

He further stressed that the four-decade conflict in Afghanistan has resulted in millions of civilians left maimed and wounded with physical disabilities resulting from landmines, IEDs, other explosives, attacks and disease. Many of the survivors of such attacks have to deal with the physical and emotional challenge of having to cope with and recover from the severity of their physical injuries, including many cases of amputations.

Those in need of support also include victims of various diseases, such as polio, spinal injuries, congenital deformities, and cerebral palsy, who are likely to rely on medical treatment for the rest of their lives. Addressing the needs of the disabled community requires increased international support and collaboration. Referring to the new collaboration, the Ambassador stated that “we are extremely pleased to facilitate the beginning of what we expect to be an important long-term partnership.”

He also highlighted the commitment and dedication of both Rector Rice and Professor Waheedullah Mohmand in ensuring that the initial idea of a collaboration between Kabul University of Medical Sciences and OsloMet, coordinated by the Afghan Embassy in Oslo, becomes a reality. Oslo Metropolitan’s Faculty of Health Science holds extensive knowledge and resources in the areas of orthopedic engineering and motion analysis. Such collaboration would lay the foundation for additional and long-term initiatives that could benefit Afghanistan in achieving self-reliance in the treatment of disabled individuals and victims of war. Ambassador Ghafoorzai stated that with the signing of the MoU, collaboration between the universities would begin in the areas of:

Rector Curt Rice, Head of Oslo Metropolitan University, expressed his gratitude to everyone involved in the process and to the start of this valuable cooperation. He stated that this MoU carries with it many opportunities that will help Oslo Met fulfill its mission to deliver research-based knowledge which will solve society’s challenges. Dr. Rice announced the extension of OsloMet’s Kabul Mobility Grant to include Kabul University of Medical Sciences in the creation of the opportunity for selected colleagues at their university to travel to Oslo. He also highlighted that OsloMet is eager to commence the partnership with Kabul University of Medical Sciences, which they envision will be rewarding for both institutions and their students. Finally, Rector Rice expressed his gratitude to all partners involved, including Ambassador Ghafoorzai in initiating and guiding this process.

Professor Waheedullah Mohmand, Head of Kabul University of Medical Sciences, expressed his gratitude to Norwegian partners and to the Afghanistan Embassy in Oslo for facilitating the initiative. He stressed that the long-lasting violent conflict in Afghanistan has left many Afghans with disabilities and in the need of urgent help. Therefore, Professor Mohmand stated that this referendum is particularly important as it will result in increased knowledge, improved educational conditions for students, and possibilities for exchanges of students and lecturers between the institutions.

In his closing remarks, Ambassador Ghafoorzai thanked everyone for participating in the event and for contributing to the signing of the MoU. He mentioned that the MoU strengthens the Universities’ commitment to this partnership and to making sure that initiatives will be tangible and result-oriented. He also took the opportunity to highlight the important work of ICRC as one of the key international actors on leading initiatives aimed to help the disabled community in Afghanistan and to hail Mr. Alberto Cairo’s lifetime work on helping the disabled community in the country.

Ambassador Ghafoorzai thanked all participants and emphasized his gratitude for Dr. Rice’s commitment to their second MoU signing in collaboration with the Afghanistan Embassy in Oslo.  Back in February this year, Dr. Curt Rice and Ambassador Ghafoorzai signed an MoU between Kabul University and Oslo Metropolitan University, to mark the beginning of a long-term partnership between the two universities. This first MoU covered academic areas of journalism, international studies, pharmacy, psychology, education, art, management, engineering, and administration. 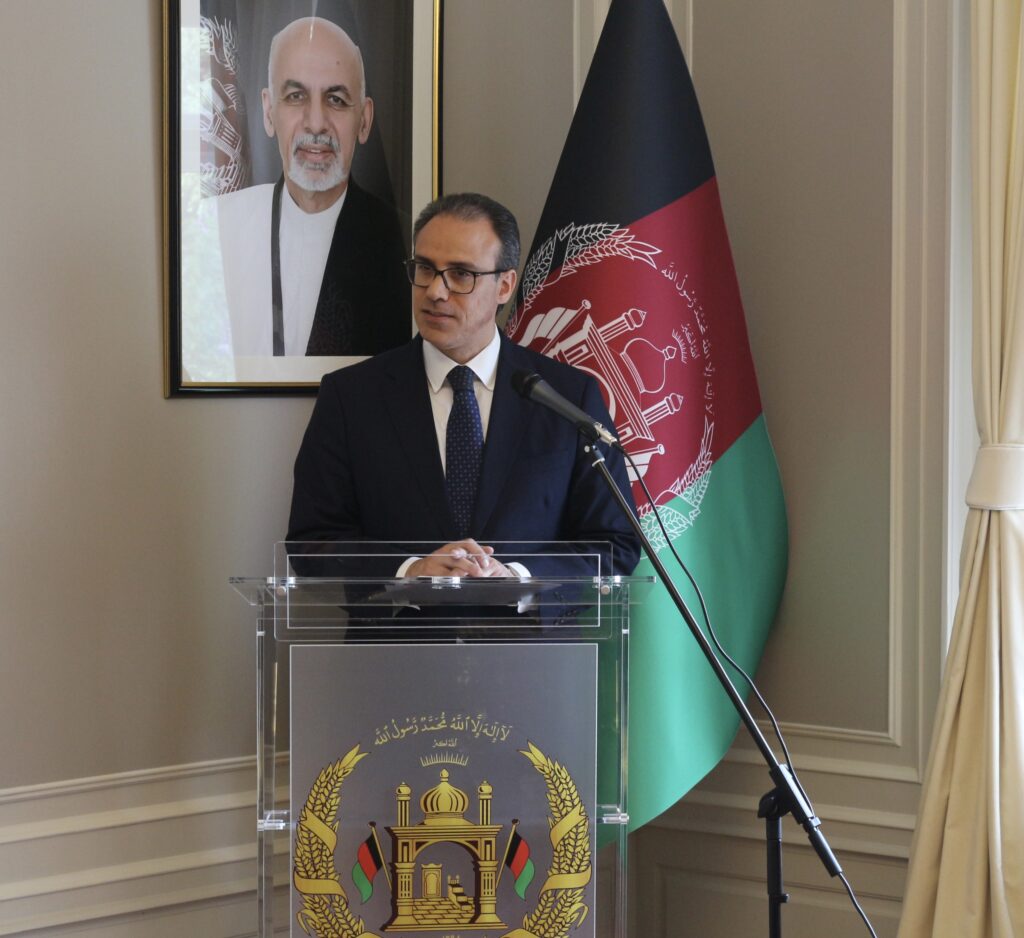 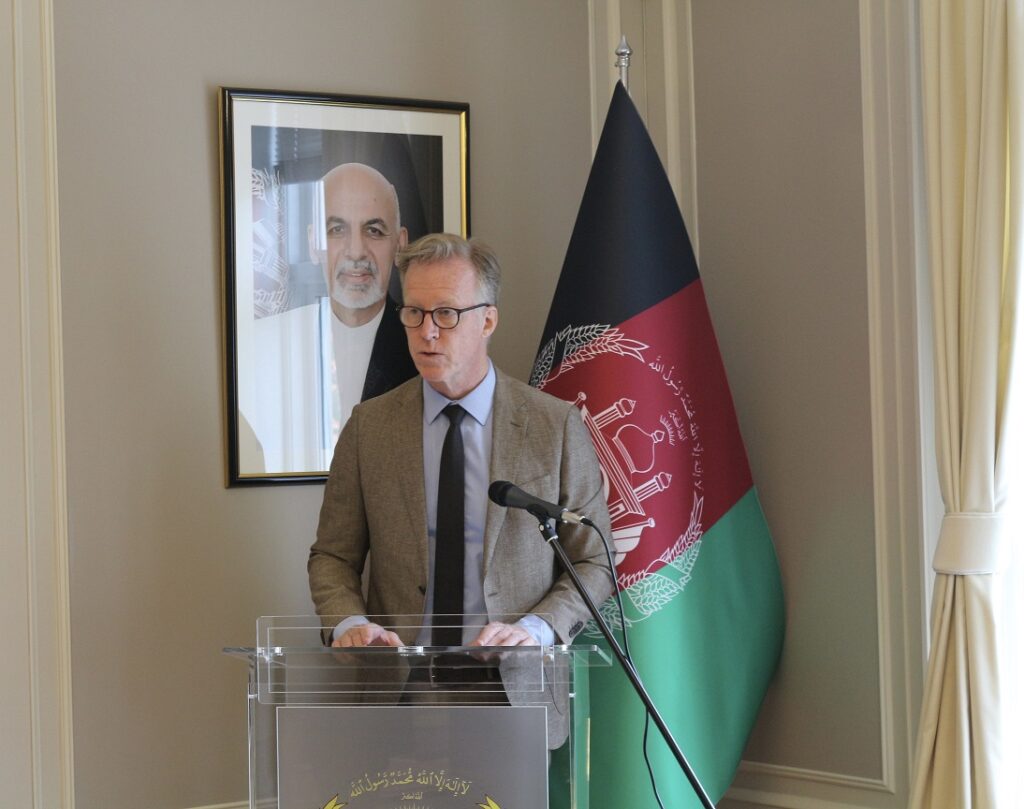 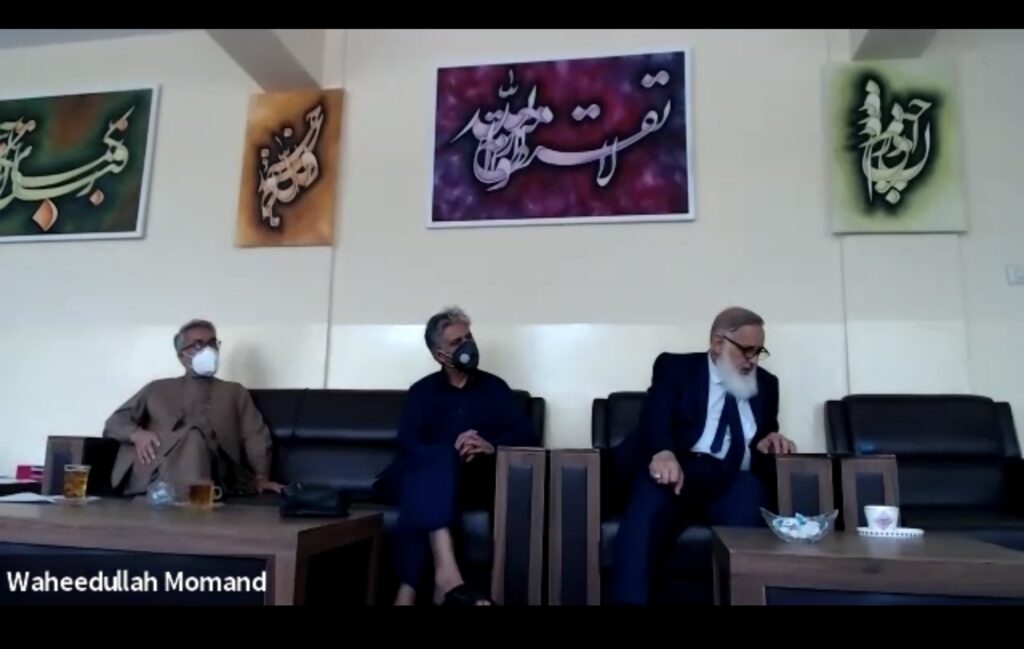 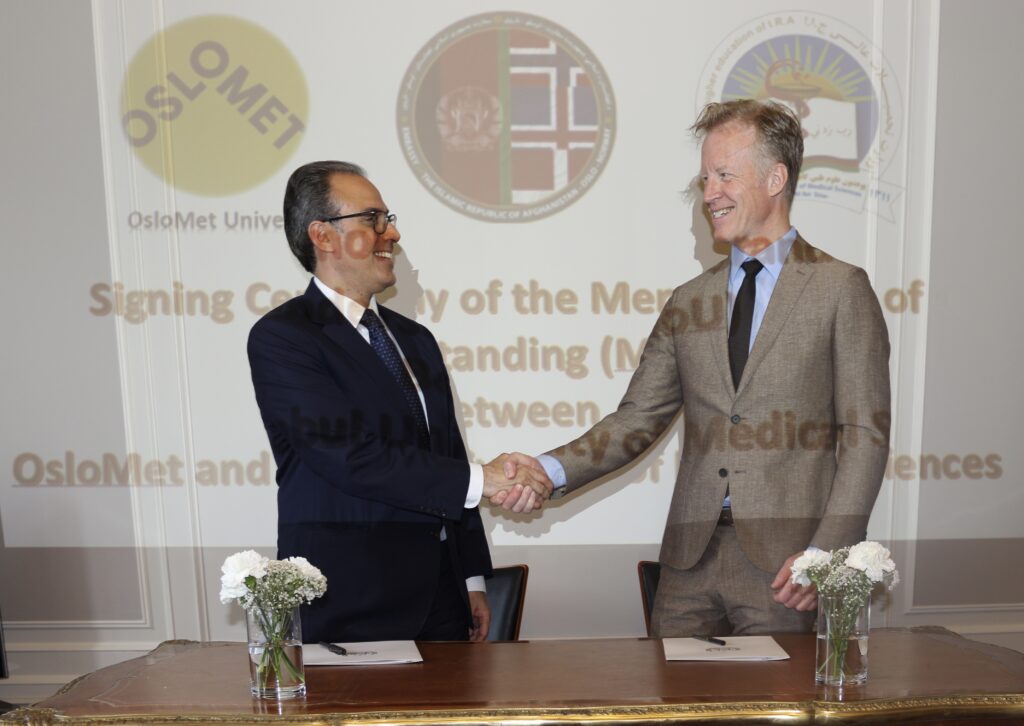 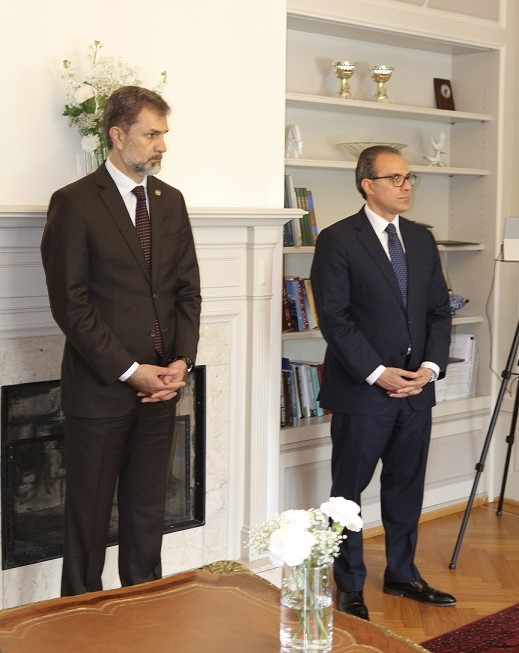 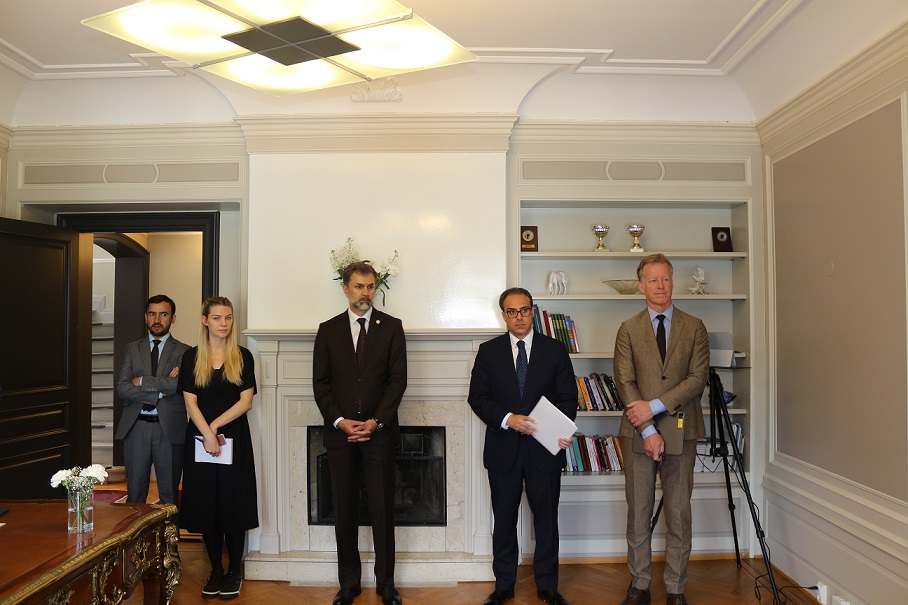 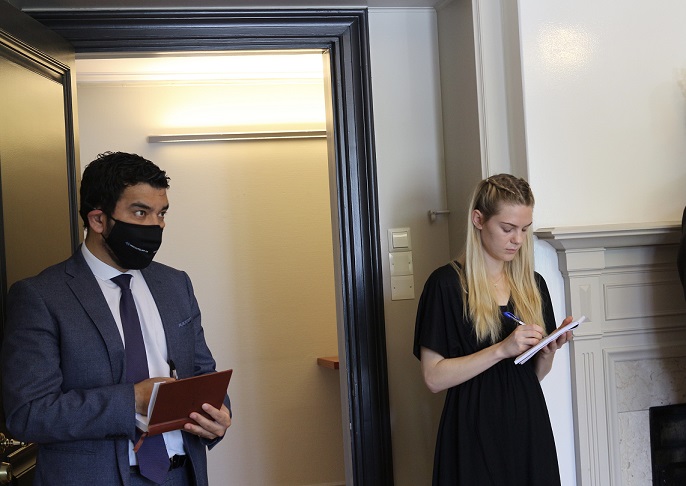 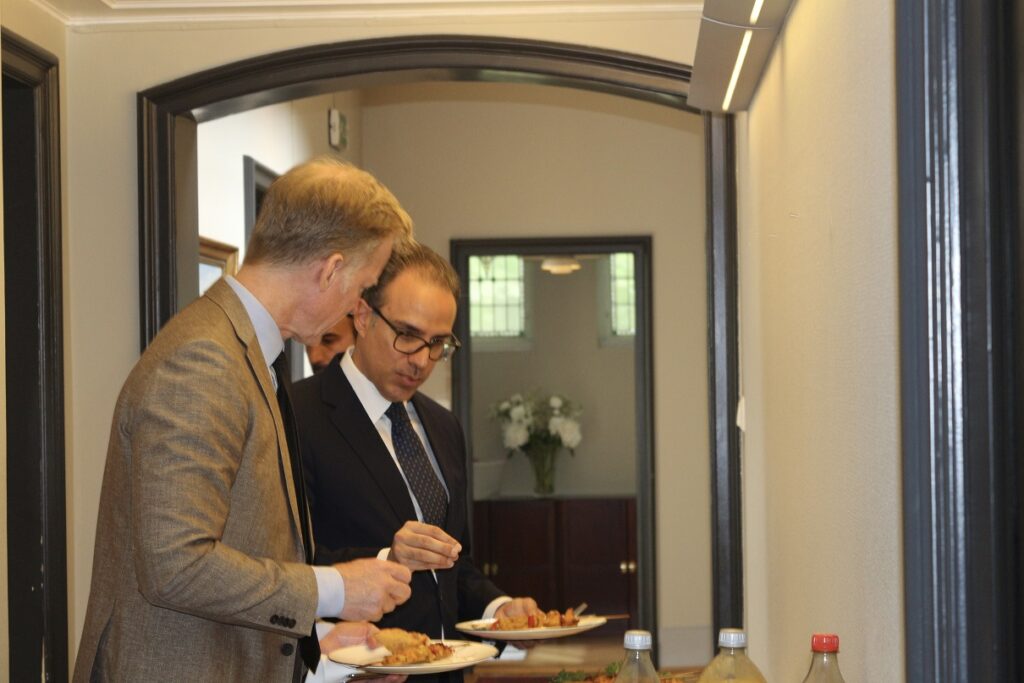 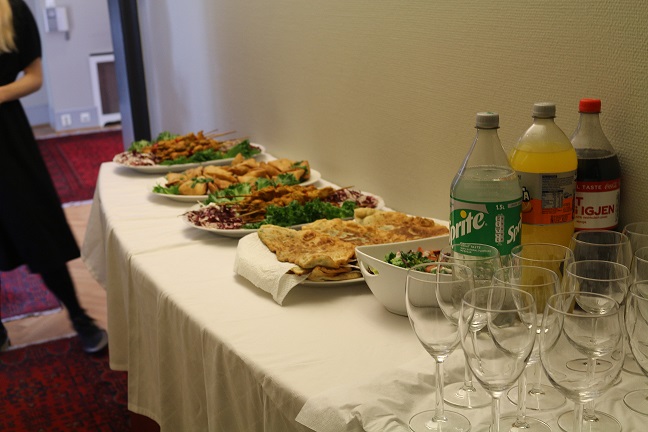