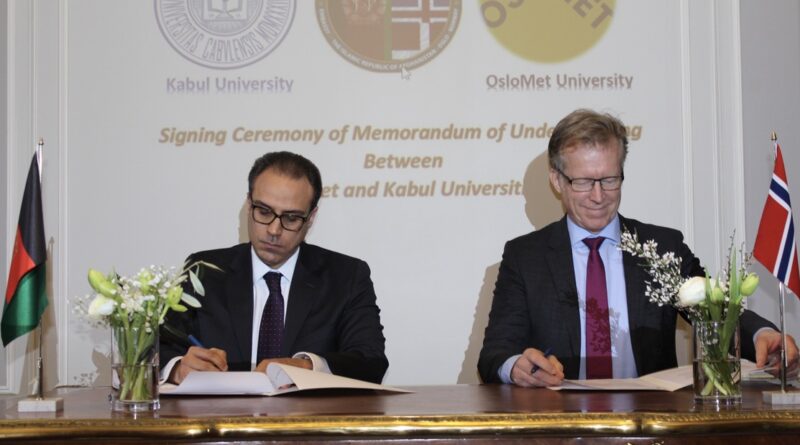 Today, Tuesday the 2nd of February 2021, the Embassy of the Islamic Republic of Afghanistan in Oslo facilitated the signing of a Memorandum of Understanding (MoU) between Kabul University and Oslo Metropolitan University, to mark the beginning a long-term partnership between the two universities.

The ceremony was attended by the two respective heads of Universities, Chancellor Prof. Mohammad Osman Babury of Kabul University and Rector Prof. Curt Rice of Oslo Metropolitan University, together with the heads of various faculty and departments of their institutions, as well as Ambassador Ghafoorzai as facilitator of the meeting and Norwegian Ambassador to Afghanistan, Ole Andreas Lindeman.

Opening the event, Ambassador Ghafoorzai highlighted the importance of the event in formalizing the start of long-term partnership and collaboration between the two universities in various fields. He also highlighted the commitment and dedication of both Rector Rice and Chancellor Babury, in ensuring that the initial idea of a collaboration between Kabul and OsloMet Universities initiated by the Afghan Embassy in Oslo becomes a reality. He thanked all participants for their participation, including Amb. Lindeman to whom he referred as a good friend and colleague with whom he was working closely to strengthen and expand the Afghanistan-Norway partnership.

The Ambassador emphasized the importance of this partnership for two most valuable reasons: first, that this partnership was “an investment in our current and future generations” and that “today’s agreement would further empower a segment of society that makes up more than 70% of our population”, which would be a vital factor in securing the country’s future.

Second, the initiative “reflects Norway’s long-standing partnership with Afghanistan, and its support for peace and prosperity” in the country, which is highly valued, and which continues to grow and expand Afghanistan’s Strategic Partnership with Norway.

Ambassador Ghafoorzai stated that with the signing of the MoU, collaboration between the universities would begin in the areas of online teachings, course creations and research among respective faculties, as well as long term initiatives for capacity building and the start of physical exchange of students and academic staff between the two institutions. The MOU covers academic areas of journalism, international studies, pharmacy, psychology, education, art, management, engineering, and administration.

In that regard, such collaboration would lay the foundation for additional and long-term initiatives at a crucially important period, whereby Afghanistan would continue to rely on the talent and service of its talented and committed youth, to consolidate peace and advance Afghanistan’s development in the post-peace phase.

Ambassador Lindeman on his side, welcomed the signing of the MOU as “a great bilateral agreement” and that the Norwegian Embassy in Kabul would do whatever they can, to assist the two Universities’ partnership. He further expressed concern over targeted attacks on students, women, human rights activists, and the peaceful future of Afghanistan as such, making the collaboration between OsloMet and Kabul Universities an important aspect of peacebuilding and an investment in human capital for Afghanistan’s future.

Rector Rice, in his remarks on behalf of OsloMet University, expressed his gratitude and congratulations on the start of this valuable cooperation, which will provide the two institutions with “many opportunities” to produce knowledge for good policies, foster understanding between our countries and fulfill OsloMet’s aspiration to be an international institution. He also announced the creation of a “OsloMet-Kabul University Mobility Grant”, initially funded by OsloMet University, to enable selected staff to travel to Oslo and jointly work on enhancing academic capacity, mobility, and research.

Chancellor Babury then went on to give remarks on behalf of Kabul University, in which he conveyed congratulations and appreciation for the partnership with OsloMet University, and the facilitating and assisting role of Ambassador Ghafoorzai and Ambassador Lindeman in the initiative.

He underscored the importance of the singing of the MoU, which will help investment in human capital and Afghanistan’s peaceful future. Chancellor Babury highlighted the designation of focal points between the two universities for the initiation and implementation of specific programs under the MoU. Such partnerships help enable the institution to achieve its goal of becoming a modern and leading university, in Afghanistan and beyond. The Chancellor concluded his remarks by valuing Norway’s generous and important assistance to Afghanistan and in particular the education sector, of which they were fully aware and for which they are grateful.

In closing, Ambassador Ghafoorzai thanked everyone for participating at the event, which signified their commitment to this partnership and to making sure that it will be tangible and action oriented. In that regard he also reaffirmed his assurance and that of his colleagues at the Embassy, to help ensure the success of the partnership. 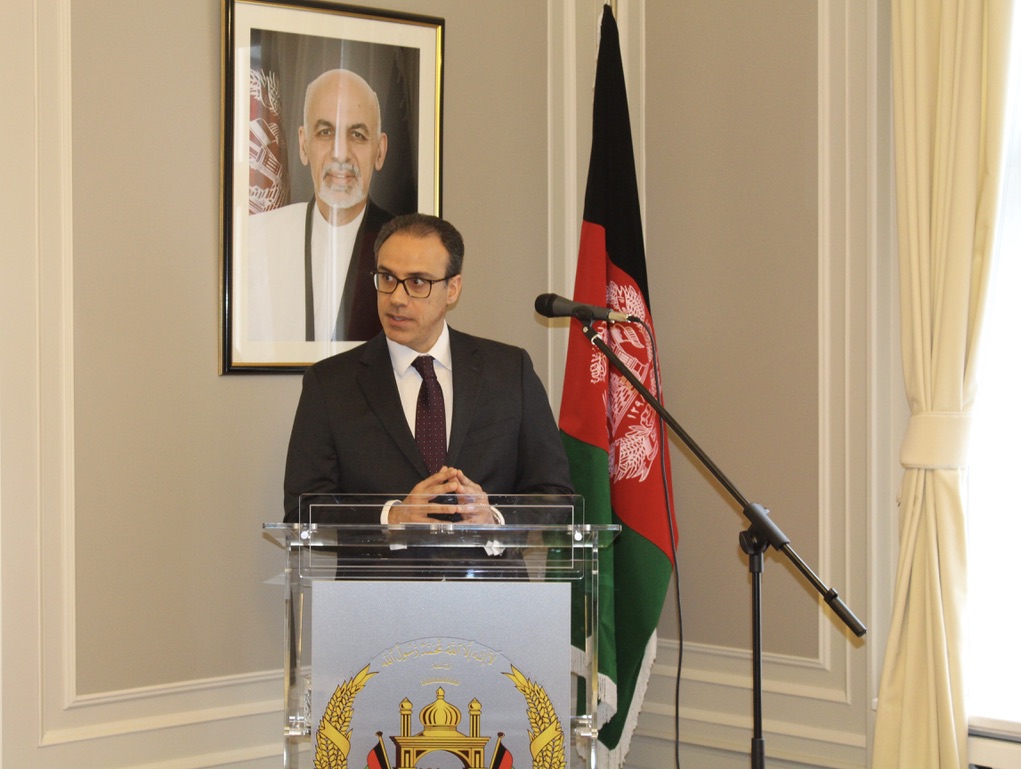 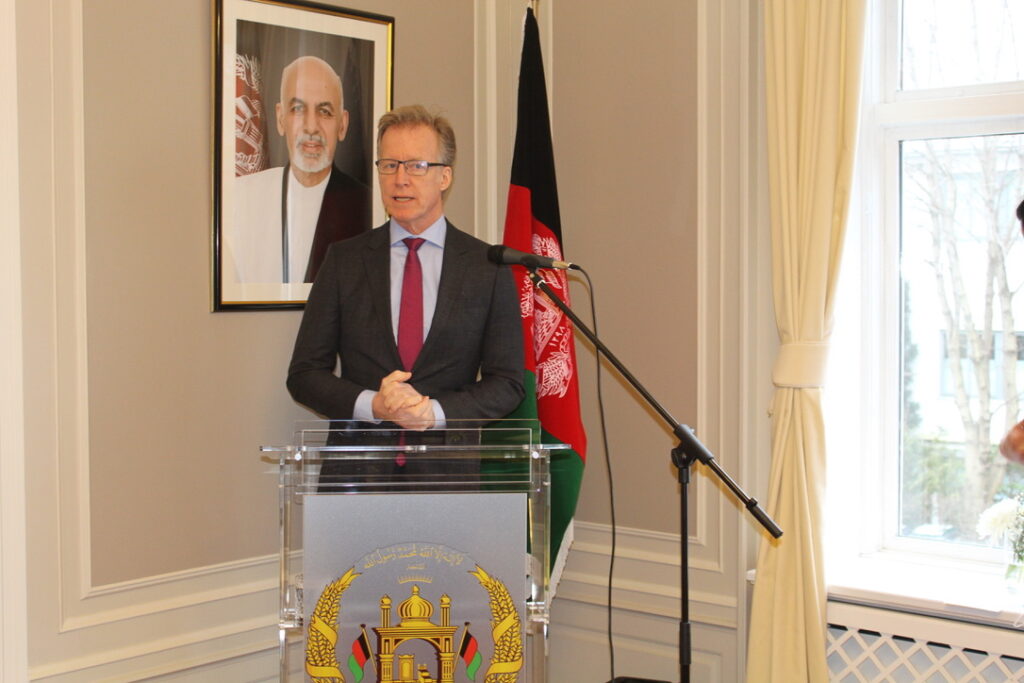 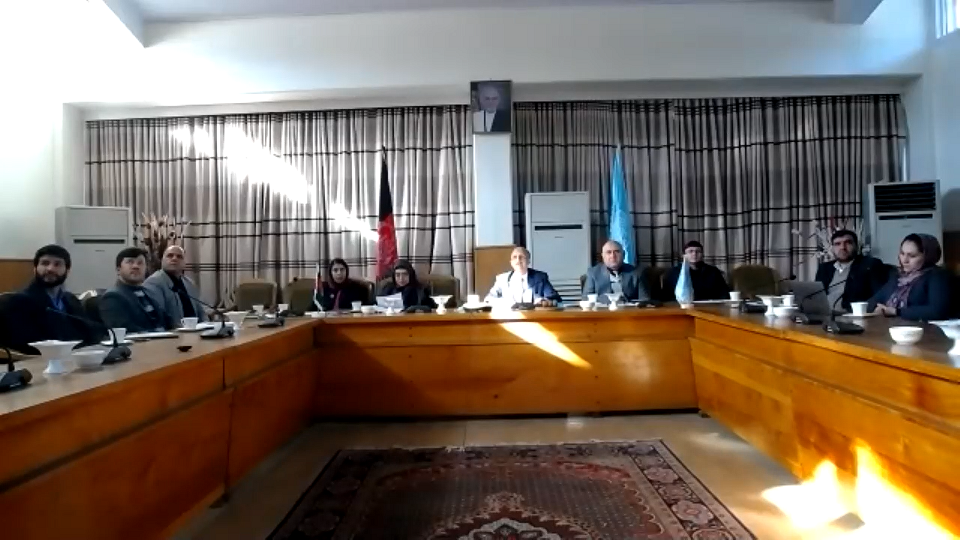